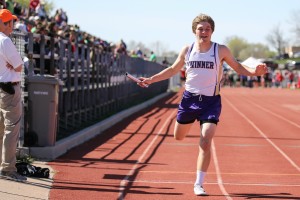 Cameron Kuil led the Winner High School boys and girls track teams as he took second place in the 400 at the Legion Relays in Pierre on Friday. Kuil finished in :52.20. This was his first race of the season as he was recovering from a basketball injury.
In this meet, Winner was competing against the larger schools from Pierre, Rapid City, Sioux Falls and Brandon Valley.