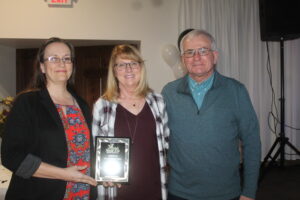 Bob Kucera, right, received the achievement award at the Winner Area Chamber of Commerce banquet on Jan. 9. Kucera is pictured with his wife, Shelley, center, and Dr. Anora Henderson, who made the presentation.

There is a quote that says, “You don’t have to be great to start, you just have to start.” That is exactly what the 2019 Achievement Awardee started doing at the age of 18.

Bob Kucera was presented the achievement award at the Winner Area Chamber of Commerce banquet on Jan. 9 at St. Mary’s Hall.

Robert “Bob” Kucera is known for joking around and telling people that he learned his trade from the “school of hard knocks.” While Bob will down play his achievements, we know that “achievement” is truly one of many words that can describe this successful businessman.

At an early age, Bob worked on the family farm and for a lumber company while attending high school.

Bob had a strong work ethic like his father whom he spent a lot of time with and will tell you it wasn’t always easy. In 1972, a year after graduation, Bob’s life drastically changed when his mentor and father passed away. Being the second oldest of five siblings and the oldest boy, he knew life would never be the same.

In 1974, Bob moved to Winner and shortly after married his sweetheart Shelley McCormick. He began working for Osborn Electric and helped his father in-law, Glenn Bloom in the evenings and weekends. While working for Glenn, Bob did everything from cleaning businesses to learning construction trade and electrical skills.

While working for Osborn Electric, he managed to work his way through his electrical apprenticeship, journeyman’s status and eventually gained his contractor’s license.

Bob’s knack to keep busy did come with a price. Shelley can tell you about the many nights she felt like a single mom raising their three boys. Bob would start his workday very early and always seemed to end the day far past dinnertime and always later than planned. However, Bob found time and great pride in helping coach both wrestling and baseball while the boys were growing up.

In 1977, Bob bought Glenn’s business and started his own electrical shop behind their home. Due to an illness, Bob had to face a hard reality and was left with the decision to stop doing electrical work for a year and instead worked for Grossenburg Implement. However, knowing that the electrical business was Bob’s true calling, he made a commitment in 1983 to start building his own business.

Today, it is hard to believe that this business started with just a couple part-time guys and a full-time dream. As the business began to grow, Bob outgrew the backyard electrical shop and in 1992 made the decision to purchase the building where Kucera Electric is currently located. Bob was also able to increase his staff to ten employees, kept inventory and started selling retail items.

Even though Bob has now expanded and trusts his employees and devoted son to do the work, he continues to do the majority of the service and after hour emergency calls. He can always be found on the job site working right alongside his employees, but of course never without his side kick Abe. Kucera Electric is proud to provide services to a 90 plus mile radius from the Winner area.

Besides being a successful business owner, you can often find Bob out and about in the community striking up a conversation with just about anyone. He previously served eight years as a Winner City Councilman and continues to show his support to local businesses, the school system, and through community events.

He especially enjoys supporting and attending any Pheasants Forever, Elks Foundation, and Turkey Federation events.
Bob is also known as the Main St. snow scooper as you will often find him driving his Bobcat up and down the street helping out when and where he is able.

Although his business is a priority, Bob would be disappointed if we did not mention how much his family means to him. I think it is safe to say that in his mind, they are truly his greatest achievement (especially those cute grandkids). He will flat out tell you that all his grandkids get their good looks from their Papa!

All jokes aside, Bob and Shelley are very proud of all their sons and their beautiful families. Chad and wife Tina live in Bozeman, MT, Jeremy and wife Lauren live in Parker, CO with their 2 daughters, Natalie (5) and Hannah (4). Tyler and wife Danielle live in Winner with their 4 children, Deja (16), Ada & Jake (3), and Stella (3 months).

Even though it has not always been the most glamorous journey, Shelley is truly Bob’s best friend, partner in crime, and the love of his life.

While we could go on and on about Bob’s achievements, there is a short story which summarizes Bob’s outgoing and generous personality. While traveling last week, Bob, Shelley and two grandchildren came upon a couple traveling from North Dakota who had just hit a deer with their car on the highway. Without hesitating, Bob told Shelley that they needed to stop and help the couple.

The short version is not only did Bob stop to help the couple; the couple ended up staying with the Kucera’s for a couple days which allowed them to make arrangements with their insurance company, find new transportation and to continue their trip to Arizona. The moral of the story is if someday you are stranded on the side of the road may God Bless you with your own “Bob Kucera” because he is truly one of a kind.