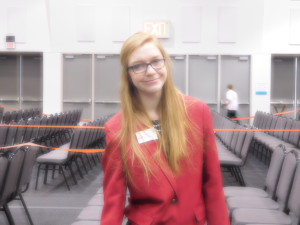 Members from the Winner FCCLA Chapter joined over 1,500 members, advisors, and guests who attended the South Dakota FCCLA (Family, Career and Community Leaders of America) Leadership Conference held on April 2-4 at the Denny Sanford Convention Center/Sheraton Hotel in Sioux Falls. The “Unlimited Possibilities – It’s Up to You” themed event was a big success.

A team of ten officers (including Shannon Duffy of Winner) from across the state ran the meeting as a conclusion to their term in their respective state officer position. Members attended workshops, competed in STAR (Students Taking Action with Recognition) Events, and ran for leadership positions. Jessie Funk, who is an award winning singer and author of six books, was the keynote speaker on Sunday night during the opening general session.

On Sunday and Monday students had the opportunity to attend workshops presented by leadership team members, FCCLA members and officers, and other groups and organizations.

On Monday evening during the second general session, awards and recognition were announced.

FCCLA is the only youth-led organization with family as its central focus. Members learn how to be active community leaders, become caring family members, and prepare for life beyond high school.