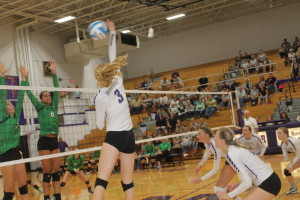 Winner Lady Warriors volleyball team opened the season with a victory over Bon Homme last Tuesday in front of the home crowd.  The Lady Warriors won in 3 sets 25-12, 25-18, 25-19.

“We came out focused and ready to play,” said coach Jaime Keiser. “We were aggressive and did a great job of attacking the ball which kept Bon Homme on the defensive end. We were getting in defensive position and playing very well as a team,” said Keiser.
“It was a total team effort and everyone stepped up and did what they needed to do to win.”

Coach Keiser said Miller is great team and brought back a lot of players from last year. “They have a very balanced and athletic team. We came out ready to play and battled back after being down to win set 1. They had some hard hitters and did a good job of playing defense and digging up their hard hits but it kept us out of system,” explained Keiser.

“We played with a lot of intensity and never gave up. Hopefully we will get another shot at them in the Big Dakota Conference Tournament.”

The next a action for Winner will in a triangular with Valentine and Ainsworth on Aug. 31. On Sept. 5, Winner will host Bennett County and Gregory.