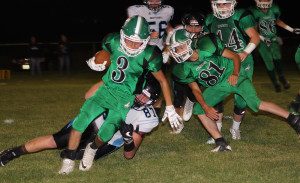 The game was delayed for an hour and a half due to lightning, however the two teams were able to get in the game.

The game ended in the third quarter due to a mercy rule.

Scoring for Colome were Jackson Kinzer on a 36 yard run, Layton Thieman threw a 50 yard pass to Kinzer, Beau Bertram caught a 46 yard pass from Thieman, Wyatt Cahoy scored on a 1 yard run, Chase Dufek on a 69 yard run and Linkyn Petersek scored two touchdowns on runs of 17 and 15 year.

Two point conversions were made by Dufek, Thieman and Nathaniel Hansen.

The Cowboys had a total of 381 yards of offense. Thieman had 96 yards passing.

“We came out and executed well,” said coach Ben Connot.

The next action for Colome will be Sept. 1 when they host Burke/South Central.