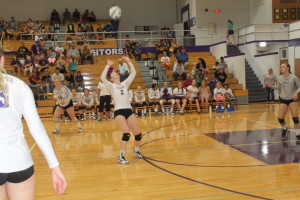 Winner got beat by Tea in 3 sets.

“We played very inconsistent and had a lot of ups and downs during the day,” said coach Jaime Keiser. “We would play very good one minute and then everything would fall apart the next time. We had a lot of serve receive, serving and attack errors which gave our opponents too many unearned points,” said Keiser.

The next action for Winner will be Oct. 3 at home against Gregory.