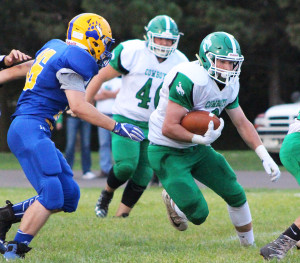 No. 2 ranked Colome scored 64 unanswered points Friday night as they rolled to a 64-14 victory over Alcester-Hudson.

The game ended in the third quarter due to the mercy rule.

The Cowboys were down early but quickly took control of the game.

The Cowboys are undefeated with a 5-0 record.

Kolton Salonen opened the scoring for Colome on a 17 yard pass from Layton Thieman.

The Cowboys put up a lot of points in the second quarter. Scoring for Colome were Jackson Kinzer on a 9 yard run, Wyatt Cahoy on a 4 yard run, Kinzer intercepted a pass from a 36 yard touchdown, Cahoy on a 3 yard run and Chase Dufek on a 40 yard run.

In the third quarter, Thieman scored on a 4 yard run and Linkyn Petersek on a 53 yard run.

The Cowboys finished the game with 448 total yards.

9 tackles and each had an interception, Beau Bertram and Salonen with 6 each.

“We faced some adversity but we responded well as team,” said coach Ben Connot. “We had some people step up and play some important roles. I am pleased how we came back,” said Connot.

This Friday Colome will host Scotland in a homecoming game at 7 p.m.