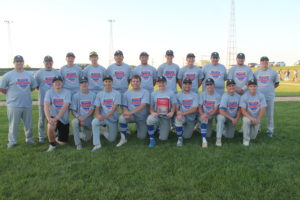 Winner/Colome baseball team won the Region 4B tournament with a 4-1 victory over Platte-Geddes on May 21 in Winner.

With the victory, the Royals remain undefeated 13-0.

Both teams advanced to the state tournament which was held in Sioux Falls at the Birdcage.

The first game for Winner/Colome in the state B tournament was against Lennox on May 28 at 7 p.m.

In the region championship, Ty Bolton pitched a one hitter and struck out seven batters while allowing one run.

Riley Calhoon knocked in a pair of runs while Nick Lantz also drove in a run. Levi McClanahan, Layton Thieman and Oscar Pravecek each had a hit.

In the semifinals of the super regional, Winner/Colome blanked Lead-Deadwood 10-0.

Jackson Kinzer pitched a shutout in six innings. He had nine strikeouts.

Key batters for the Royals were Bolton with 2 singles, 2 RBIs; Lantz, 2 singles and 1 RBI; Kinzer, a single and 2 RBIs; Thieman, triple and 2 RBIs and Pravecek with an RBI triple.

“We are playing our best ball of the past couple seasons right now and just hope that it continues,” said Weber. “Baseball is a funny game and anything can happen at any time but we feel confident that we are one of the best teams in the state and we intend on proving it in Sioux Falls.”