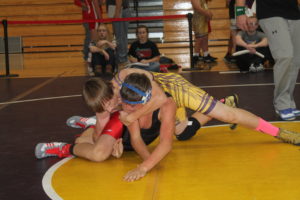 Winner Area wrestling team had two champions at the Valentine Invitational this weekend.

Turnquist was named the outstanding wrestler of the tournament. This award is voted on by the coaches. He beat a Valentine wrestler that was a state champion last year and had never lost a varsity match.

Winner coach Spencer Novotny says Valentine is a pretty tough tournament. “It has been the toughest tournament we have attended to this point,” said the coach.