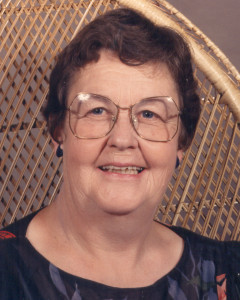 Mavis was born April 18th 1934 to the union of Ralph and Margaret Pettit (Holden). She was the eldest of a family of 13 and started a lifelong experience of mothering and nurturing very early in life. Mavis was baptized into the Catholic Church in Dallas shortly after birth and was supported by her faith throughout her life. Mavis attended rural elementary schools and graduated from Colome High School. She pursued a teaching degree and for several years taught at rural schools near Hamill, Winner, and Colome.

Mavis married Richard M (Dick) O’Bryan on July 7th, 1955 in Danton in a small church ceremony, which began a 60 year journey of love and devotion to husband and family from which 5 children were born. Shortly after marriage Mavis and Dick purchased their farm home south of Winner and worked side by side to improve and enlarge it their entire life. Mavis was always very proud of what had been accomplished with such a meager beginning and hard work.

Mavis was a lifelong resident of Tripp County and actually lived most of her life within 2 miles of where she was raised. Although her travels were few and distance was short she was always close to where she wanted to be…Home!!! Home where there were no locks on the doors, the wood stove was always warm, the coffee was always fresh, there was always room at the table for more, and she offered whatever she had to eat and enjoy.

Mavis’s deep faith in God and her ability to see the good in all people molded her into a very giving person. She always had something to give whether it be eggs, cream, garden produce, canned goods, cup of coffee, a moment in time, some comfort and yes sometimes even “a piece of my mind”. She was always giving something to someone. Her giving attitude was very important when she recognized firsthand the need for support of the mentally challenged in the area. Her efforts and the help of many enabled the forming of the South Central Adjustment Training Center in 1975, with a goal of supporting, protecting and enabling the mentally challenged to have opportunities equal to their capabilities. Over time the efforts and goals have led to the current “Community Connections“ group.

Mavis’s giving efforts although somewhat in the background did not go unrecognized. She was lifelong member of the Catholic Daughters of America and a member of the Legion Auxiliary Post of Colome. She was nominated and received the 1984 ARC State Volunteer of the Year and the 1985 ARC North Central Region Volunteer of the Year. Mavis also spent many hours, days, and years at the Winner Regional Hospital volunteering as a nurse’s aide before actually becoming an employee.

In 1992 Mavis was nominated and received the State of South Dakota Volunteer of the Year Award for her volunteer efforts. This award attracted the attention of the National Volunteers Association, which recognized and nominated her to receive the National Jefferson award. She very humbly became one of very few recipients of this award in Washington, DC with a visit to the White House in June 1992.