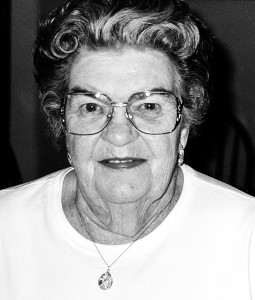 Marion M. Pearson lived 91 good years on this planet and was tough as nails and sweet as sugar. She died peacefully on December 20, 2015, in her home.
She was born Marion Marie Eldridge in a sod house near Dixon, South Dakota, in Bull Creek Township on April 20, 1924. Her parents were Charley Eldridge and Christine (Rehwinkle) Eldridge. She had two brothers, Bryon (Viola) and Bud (Bonnie), and one sister, Elaine (John).
Marion rode a horse to country school as a student and later taught at a country school. She held many jobs through her lifetime, played in a band, owned a bar, made furniture, was a secretary, and loved her family with all her heart. She had two children: Phyllis, born in 1945 from her marriage with Vince Feyereisen; and Ross born in 1955 from her marriage with Clarence Ford. Her final marriage was to William Pearson in Rapid City.
“Grandma” as she was affectionately called was preceded in death by her parents, brothers, and her son Ross, as well as her husbands and her sister’s husband, John Kunze.
She is survived by her sister, Elaine Kunze, her daughter, Phyllis Rensch, grandchildren Timothy (Kimberly) Rensch, Melissa (Patrick) Wood, William M. Rensch II, and her great-grandchildren Cameron Parette, Merissa Parette, Gabriel (Stephanie) Rensch, Alexander Rensch, Hayden Rensch, Mason Rensch, Morgan Wood, and Callahan Wood. She is also survived by sister-in-law Bonnie Eldridge, and the children of her siblings.
Grandma loved to garden, watch birds, have Christmas, and picnic on the Fourth of July. She was proud to have been raised on a farm, was a hard worker, and watched over and protected her family. She was frugal, made the best bacon and egg breakfast ever, and made good potato salad. She was patient and generous and called those near and dear to her “Sugar.” She smoked most of her 91 years, saying, “Smoking is bad for most people, but it is good for me.” Every single time you ever visited her, when you left, no matter how much her arthritis hurt or her walker resisted, she would get up from her chair, make her way to the screen door, poke her hand out and wave goodbye and smile, as if she knew it might be the last time. This time it was. Goodbye Grandma. We all love you so.