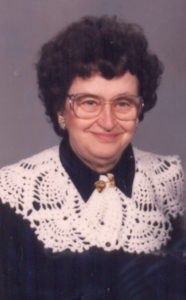 In 1948, Magdalene married Richard Leroy Doescher. They made their home across north central Nebraska, South Dakota and Northwest Iowa. They retired to Sioux Falls shortly after Richard suffered a debilitating stroke in 1990.

Megs was a proud housewife and mother, held varying positions of church secretary to retail. She was a past active Philanthropic Educational Organization (PEO) Member, and taught Adult Christian learning throughout a substantial span of her life. She volunteered later in life while living in Sioux Falls at the Washington Pavilion and was named Pavilion Volunteer of the Year in 2012 along with holding a RSVP Volunteer for 25 years.

Megs thoroughly loved to sew, crochet and especially quilt. Her passion for crafts is readily apparent in several of her children and grandchildren. Known as the quilt lady, her motto of life was, “when life gives you scraps, make a quilt.” Those are words she lived by her whole life, having grown up in the depression era, there was never anything wasted in the Doescher home.
With Magdalene and Richard’s marriage, they have 4 sons and 4 daughters Rose (Joe, deceased in 2010) Enders Jenison, MI; Rick (Bev) Champaign, Ill; Randy (Linda), formerly from Mitchell, SD; Ronda (Harlan) Hanson, O’Neil, NE; Judy (Jack) Arthur Winner, SD; Cheryl of Sioux Falls, SD; Tom of Des Moines, IA; and Chris (Lisa) of Tea, SD. In addition to Megs and Dick’s children, she was blessed with 19 grandchildren, 27 great grandchildren and many friends that Megs so enjoyed her time with having tea parties.

She was preceded in death by her husband, Dick, both parents, and siblings: Dave, Virgil, Carolyn, and Shirley.

Megs learned to enjoy life after Dick’s death with her large trust of friends that spanned her entire life. She passed with a sense of fulfillment in her life, enjoying every minute right up to the last minutes baking and decorating Christmas cookies.