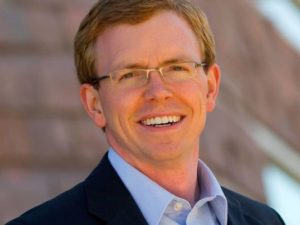 Dusty Johnson, Republican candidate for U.S. Congress, stopped in Winner on Monday, Oct. 1. He was visiting with voters and discussing issues that are important to them in the Nov. 6 election.

Johnson believes a candidate has to go out and interview for the job. “You have to be able to get out there, look people in the eye and shake their hand. That is why I love days like today as I get to find what people are talking about,” he said.

The day Johnson was in Winner President Trump signed a new trade deal with Mexico and Canada. “There are all kinds of ways that the new NAFTA (North American Free Trade Agreement) is going to be better than he old one,” he said.

Johnson believes the farm bill needs to be finalized. “I have no faith that Congress will get it done this year. We need a good farm bill. Next to good weather the best friend of a farmer is stability. Without a farm bill in place we don’t have that kind of stability,” he explained.
Johnson was asked his thoughts on the Keystone XL pipeline. He pointed out that a pipeline done right is the safest way to ship oil. “That is why we have these intensive review processes.”

On health care, the candidate said he would like to see more flexibility to the states.

Johnson says he does not think America is better by calling each other names and trying to destroy people’s careers. I think we should be trying to find ways to work together.”