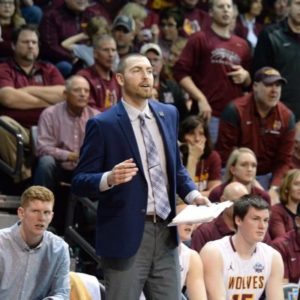 Horstman is a graduate assistant at Northern and the Wolves played March 20 in Sioux Falls in the NCAA Division II Elite Eight.

Horstman was featured in a sports story in the Mitchell Daily Republic on March 20.

Now, he is in a position to share his college experiences with the Wolves and influence their players.

This season the Wolves are reaching their potential and are having one of the best seasons in school history. They are 34-3 and have tied the school record for wins in a season.

NSU is playing in its second ever Elite Eight.

“I have never been a part of something as successful as what we are doing right now,” Horstman said. “It’s been fun to be a part of that and be around these guys all the time and just having a lot of fun being successful.”

Horstman is learning from some successful coaches. Paul Sather is the head coach at Northern.

“The basketball knowledge you gain from that guy is unbelievable,” Horstman said. “He’s super intelligent. Offensively, his stuff is really great and it shows with what we’ve done on the floor.”

As for the future, Horstman says he wants to stay in college coaching. But is not sure where he will be next year.

“I am doing all I can to help these guys be successful and that’s kind of the gig right now,” he said.