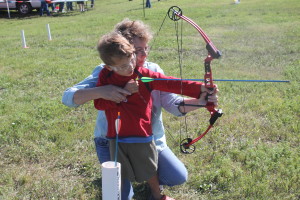 Over 100 youths took part in the Outdoor Youth Day Saturday at the Rosebud Arrow, Rod and Gun Club.

The cool Saturday morning did not dampen the spirit of the youths attending. Helping these youths were over 50 volunteers.

Several stations were set up where youths could learn about archery, take part in a mock pheasant hunt, feel what it was like to be in goose blind and what to do to call in the geese. There were several shooting stations, lessons on castings and turkey and goose calling and sling shot.

The Winner High School chapter of Future Farmers of America helped and provided a bean bag game.  A lunch was served at noon and prizes were handed out including a drawing for several guns.  The afternoon show was put on by Patrick Flanigan, an Xtreme sport shooter. Flanigan holds nine shooting records. In addition to shooting clay pigeons, he shot everything from eggs to golf balls.

The day before coming to Winner, Flanigan had a show in Minnesota.