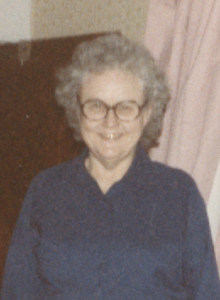 Esther was the second child, including two brothers and two sisters born into the Rang family. In 1935 the family moved to a farm south of Burke, South Dakota where one more brother was born. She attended the McCumber School and had to leave school after the third grade because she was blind in one eye. She taught herself to read. She made her home on the farm until her dad sold the farm and moved into Burke. It was in Burke where she loved to work in the yard and with her flowers. She also loved to sew, especially making dolls. She was a nanny to her nieces and nephews, the neighbor kids and their dog Skamp.

Esther remained here until she entered the senior housing in Burke, where her sister, Edith, looked after her. Due to declining health, she entered the Lake Andes Health Care Center where she was a resident for the past 19 years.