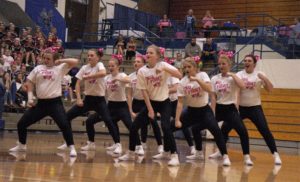 “During the season as our individual category scores kept improving we discussed the possibility of placing at state if we did our best and we did,” said coach Cyndy DeMers. “We performed well and the competition was close,” she said.

“This is a difficult sport and judged on choreography difficulty as well as performance, endurance and proficiency. Improving our skills was something we concentrated on this year. We hosted a team camp, attended a camp at USD and spent many mornings practicing. As a coach I am extremely proud of our placement and improvement over the year,” said DeMers.

Team captains Macy Olson- pom; Abby Marts- kick and Gracie Littau-hip hop have led the teams and provided both choreography and direction in all areas of this sport,” sad DeMers.

The coach recognized the two seniors Macy Olson and Maddy Hanson for their dedication and leadership.

The Warriorette pom team will be performing at the halftime of the second playoff football game on Oct. 26 at Warrior Field.