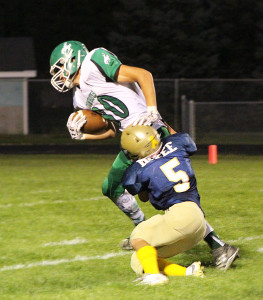 Colome Cowboys rushed to a 60-6 victory over Gayville-Volin Friday night to remain undefeated for the season.

The No. 2 ranked Cowboys are 4-0.  The game Friday in Gayville ended at the half due to the mercy rule. The Cowboys scored 46 points in the first quarter.

The Cowboys had 372 yards on offense. Dufek picked up 105 yards and Thieman had 73 yards.

The defense was led by Cahoy with 8 tackles, Beau Bertram, 7 and Nash Atteberry, 6.

“We came out ready to play,” said coach Ben Connot. “We got better this week and we need to keep that going,” he said.
The Cowboys will play Alcester/Hudson in Alcester on Friday.