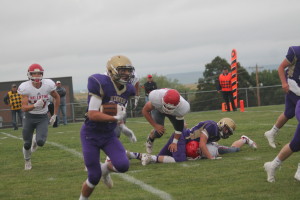 Winner High School football team improved its record to 3-1 with a 24-12 victory over Valentine,Neb., Friday night in Winner.

Coach Dan Aaker was impressed with victory and said it was a nice win for the team.  “We were ready to match their intensity,” said the coach.

The Warriors scored first at the end of the first quarter on a 5 yard run by Riley Calhoon.

Valentine came back in the second quarter and scored on a 1 yard run by Jordan Kelber which tied the score at 6-6.

The Warriors had positive field position in the first half. They were able to make some traditional Winner Warrior drives of getting third and fourth downs.

The Warriors scored a touchdown each in the third and fourth quarters.

In the third quarter, Calhoon scored on a 1 yard run. In the fourth quarter, Bolton completed a 35 yard pass to Calhoon for a touchdown.

The final score of he game was by Valentine as Kelber completed an 82 yard pass to Dylan Lurz.

The Warriors had 306 yards of total offense. Both teams were fairly even in first downs with the edge going to Winner 17-15.
Calhoon and Phillip Jorgensen both had 77 yards rushing with Matt Smither adding 69 yards.

The Winner defense played well in the game. Going into this contest the focus was to limit the big plays.

Aaker said he was worried about screens so in practice this week the team worked a lot on screens which proved beneficial in the game.

The Warrior defense was led by Matt Smither with 8 tackles followed by Shea Connot, Brandon Volmer and Levi McClanahan with 5 each. Bolton had 4 tackles.

Calhoon and Volmer each had an interception for Winner.

Aaker said the last two weeks the team has battled and played physical and played with a lot of heart.  “This week we took another step forward. We had the best week of practice all year. If we can bring that to the table each week we will continue to get better,” he said.

Aaker added that even in the 95 degree heat at practice the team came with a lot of energy.

The Warriors will take on a new team on Friday when they travel to Mt. Vernon to play Mt. Vernon/Plankinton.  The MVP team is coached by Brent Olson, brother of Winner coaches Trent and Sam Olson.

This will also be an SESD conference game.

Aaker says MVP runs a lot of options and the Warriors will have to stop Jesse Hastings who rushed for 112 yards when MVP defeated Flandreau 48-20.