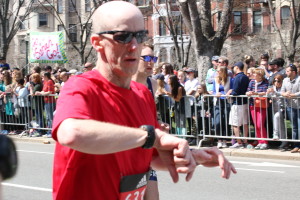 Guy Collins, formerly of the Winner area, ran in the Boston Marathon on April 18.

He is the son of Vern and Paulena Collins of Witten.

It was the 120th running of the most historic and prestigious marathon in the United States.

Collins has run 88 half marathons including one in each state, Washington, D.C., Canada and Mexico. This was only his third full marathon.
In order to qualify for Boston, Collins ran the Whistlestop marathon in Ashland, Wis., in 3:05 well below the qualifying benchmark for his age range.

He was joined and supported in Boston by his wife, Anita Collins; his sister, Leslie Bowar and his three children: Sean, Erin and Brendan Collins.

Guy is a member of the Winner High School graduating class of 1985. He now lives in Plymouth, Minn., with his wife, children and dog Winston.