Burtz to be Inducted into Winner Hall of Fame 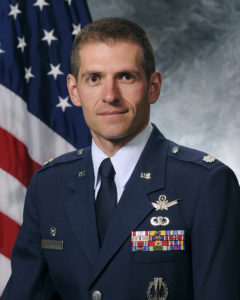 Burtz served as an adjunct facility member for Embry-Riddle Aeronautical University and the University of Maryland university college, commanded a squadron of satellite operation instructors and served as the acting dean of the National Security Space Institute.

He is currently an assistant professor of astronautical engineering at the U.S. Air Force Acadmey.

Burtz has played the tuba in three symphony orchestras including the Colorado Springs Brass which he is the founder.
Burtz is an avid living historian and horseman, reenacting cavalry action from the Mexican War through the Civil War and Indian War.

Together with his wife, Angie, they have two sons: Mason and Baxter.

Burtz is the son of Malon and Alona Burtz of Winner.