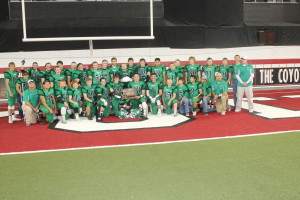 Three members of the Colome football team have been named to the Class 9B all-state team.

Colome won the Class 9B championship over Langford Area and the Cowboy all state picks are Kelly O’Bryan, Matt Campbell and Wiley Heath.

O’Bryan was an all around asset for the Cowboys catching 31 passes for 525 yards, 8 touchdowns and racked up 1,280 yards of total offense.  For his career, the Colome senior had more than 60 catches for 1,045 yards and 15 touchdowns.  In the championship game, he was named the outstanding back.

Heath was named to the defensive unit as a linebacker. Heath had 92 tackles for the season and recorded 201 tackles for his career along with 3.5 sacks. Krumpus said Heath’s top trait was putting himself in the right position to make the play.

Named to the honorable mention list was Colome’s Isaac Kortan.