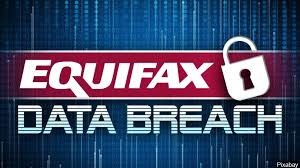 Attorney General Marty Jackley has joined with attorneys general around the country in a letter to Equifax requesting that it disable links for enrollment in fee-based credit monitoring service in the wake of the massive data breach impacting 143 million people.

“This breach affects millions of Americans including thousands of South Dakotans. Consumers, who are at absolutely no fault in this situation, should not have to pay anyone especially Equifax to either monitor or to freeze their credit,” said Jackley.

The investigation was launched as soon as Equifax publicly disclosed the breach. Equifax is offering free credit monitoring services in response to the breach, but the attorneys general today objected to Equifax “seemingly using its own data breach as an opportunity to sell services to breach victims,” they wrote.

“We believe continuing to offer consumers a fee-based service in addition to Equifax’s free monitoring services will serve to only confuse consumers who are already struggling to make decisions on how to best protect themselves in the wake of this massive breach,” the attorneys general wrote. “Selling a fee-based product that competes with Equifax’s own free offer of credit monitoring services to victims of Equifax’s own data breach is unfair, particularly if consumers are not sure if their information was compromised.”

The attorneys general also said that, although Equifax has agreed to waive credit freeze fees for those who would otherwise be subject to them, the other two credit bureaus, Experian and Transunion, continue to charge fees for security freezes. The attorneys general said that Equifax should be taking steps to reimburse consumers who incur these fees to completely freeze their credit.

The attorneys general have also had communications with Equifax expressing concerns about terms of service relative to the free credit monitoring services and the prominence of service enrollment information on Equifax’s Web page. Equifax was responsive to these concerns. 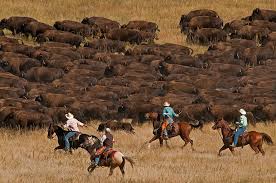 “Each year, the Buffalo Roundup brings up to 20,000 spectators from around the world to Custer State Park to view the park’s 1,300 buffalo and watch the Old West come alive,” said Katie Ceroll, director of the Division of Parks and Recreation. “To have an arts festival with more than 125 arts and craft exhibitors means that there will be no shortage of entertainment this year for the entire family.”

The parking areas for the Roundup, located near the corrals along the Wildlife Loop Road, open at 6:15 a.m. MDT and close at 9 a.m. MDT on Sept. 29. For safety reasons, spectators need to remain in the viewing areas until all the buffalo are corralled which typically occurs around noon.

The annual Arts Festival runs from 10 a.m. to 5 p.m. MDT on Thursday and Friday and from 9 a.m. to 4 p.m. on Saturday, Sept. 30. The Arts Festival takes place near the State Game Lodge.

“While the Buffalo Roundup’s primary purpose is herd management, it also provides our visitors an experience that is unique in the entire world,” said Jim Hagen, Secretary of the Department of Tourism. “We hear from visitors around the globe about how incredible it is to watch the bison thunder over the rolling prairie. It’s something they never forget and provides great storytelling and organic word-of-mouth marketing about our state.”

A state park entrance license is required on Thursday and Saturday, but there is no cost to attend the Buffalo Roundup or Arts Festival on Friday. Share this year’s event photos with us and let others who cannot attend take in the experience with you by using #SDintheField and #BuffaloRoundup when posting images to Facebook, Twitter or Instagram. 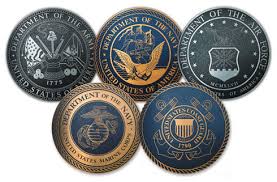 “The men and women who attend our nation’s military academies are some of the very best our country has to offer,” said Thune. “Their leadership and commitment protect our nation and keep our freedoms secure. It is an honor to nominate South Dakotan each year to our nation’s service academies.”

“Year after year, I’m amazed by the integrity, grit, and determination of the South Dakota students who apply to our nation’s service academies,” said Noem. “I’m honored to be able to nominate some of these incredible young people to serve and I look forward to seeing all they will accomplish.”

Thune and Noem will each compile separate lists and make nominations to the academies of the most qualified candidates by January 31, 2018. Applicants are encouraged to submit applications to both congressional offices in order to better their chances of receiving a nomination. The academies will make the final decision on acceptance and announce appointments next spring.
Interested applicants should contact Thune’s office at (605) 334-9596 or Noem’s office at (605) 275-2868.

Attorney General Marty Jackley is alerting South Dakota citizens that a data breach of Equifax, one of the three (3) Credit Bureaus, has occurred which allowed thieves to access more than 143 million American consumers personal identifying information with 200,000 of them being South Dakota residents.

The facts according to Equifax are as follows:
“The breach lasted from mid-May through July. The hackers accessed people’s names, Social Security numbers, birth dates, addresses and, in some instances, driver’s license numbers. They also stole credit card numbers for about 209,000 people and dispute documents with personal identifying information for about 182,000 people.

And they grabbed personal information of people in the UK and Canada too.”

At this time we are strongly encouraging South Dakota consumers to use the following website to determine if they are one of the potential victims – www.equifaxsecurity2017.com

If the site indicates you are one of the potential victims you will be asked if you want to enroll in Equifax’s TrustedID Premier credit monitoring program. If you opt to do this you will then be instructed to return to the site to enroll in this program on or after September 14, 2017 through November 21, 2017.

“Identity theft and security breaches continue to plague consumers and businesses alike. Everyone needs to take a more proactive role of protecting personal identifying information. Regardless of whether you have been affected by this breach, every consumer should get in the habit of accessing their free credit report to be alerted to matters affecting their credit,” said Jackley.

Even in light of this data breach, the Attorney General’s Consumer Protection Division encourages consumers to continue the practice of checking their credit reports on a regular basis by visiting www.AnnualCreditReport.com or call 1-877-322-8228 for a free copy of your credit report. Consumers are entitled to a free copy from each company every 12 months. If consumers find errors on their report, contact the reporting agency in writing. Consumers may also want to consider some of the following options as a better way of protecting themselves.

• Consider placing a CREDIT FREEZE on your files. A credit freeze makes it harder for someone to open a new account in your name. Keep in mind that a credit freeze won’t prevent a thief from making charges to your existing accounts.

• If you decide against a credit freeze, consider placing a FRAUD ALERT on your files. A fraud alert warns creditors that you may be an identity theft victim and that they should verify that anyone seeking credit in your name really is you.

South Dakota consumers may contact the Attorney General’s Consumer Protection Division at 1-800-300-1986 or consumerhelp@state.sd.us for any questions or concerns. The Privacy Rights handbook is also available and is designed to assist consumers in protecting their privacy. 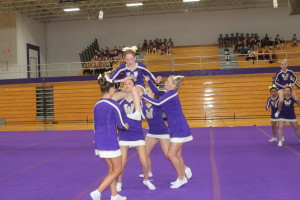 There were nine teams that competed in cheer Saturday at the Winner cheer and dance competition.

“I was so happy that the stands were full. It’s great to see all of the support,” said coach Val Ewing.

“Considering our final pyramid fell, I am very happy with how we scored. Now it is just a matter of looking at the judge’s comments and seeing what areas we need to improve on,” said Ewing.

“We don’t compete again until Sept. 25 at Northwestern so we have some time to make some changes. My girls have been practicing really hard the past few weeks and we know there is a lot of cleaning up the routine we have to do. This week we are going to focus on increasing our difficulty and building our stunts making them more solid,” said the coach.

Ernest “Ernie” Kenneth Schuppan was born to Carl and Hannah (Schmidt) Schuppan on Nov. 18, 1927 in Carter, SD. He had 4 brothers and 1 sister. Carl Jr., Frank, Fritz and Reka (twins) and George.

Ernie grew up near O’Kreek, SD and attended grade school in the Mosher area near the Horstman farm. He had many stories about his grandpa (Opa) and grandma (Oma) Schmidt. Ernie entered the military in February, 1946, learning to work on heavy equipment at a Construction Equipment School in Ft. Belvoir, Va. After construction school, Ernie was placed on a ship. While out at sea, many were getting sea sick, so sneaky ole’ Ernie volunteered to be a cook instead of clean up. Ernie was Honorably discharged September of 1947.

In August of 1948, he married Phyllis Anderson. They lived in Winner, SD for several years where their 2 daughters, Judy and Janna were born. Ernie and Phyllis moved to the Curt Daughters and Dick McKay farm, 15 miles west of Winner.

Sundays were spent at Ernie’s baseball games in Witten and Carter. Ernie also served as a baseball commissioner for many years. In 1972, Ernie and Phyllis moved to his present home in Winner. Ernie worked at Grossenburg Implement in the Welding shop, Carlson Construction and retired and continued working managing the Winner Recycle Center. These past years, Ernie volunteered daily at the Winner Thrift Store where he still took work very seriously, right girls, winkwink. Ernie’s always said, “It doesn’t matter how you feel, you just have to keep moving.” Ernie worked literally until the time of his death.

Ernie enjoyed puzzles, card games and he especially enjoyed family gatherings until it got a little loud and then he would disappear out the back door.

He was Preceded in death by his wife Phyllis, brothers Carl Jr., Frank , Fritz and George Schuppan and sister Reka Farris, and son in law Garry Wilcox. 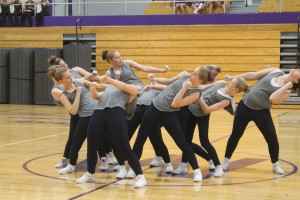 Winner dance team placed second overall in the dance portion of the Winner cheer and dance invitational on Sept. 9.

Winner placed first in hip hop, 2nd in kick and 3rd in pom.

Cyndy DeMers said as a coach she could not be more proud of the outcome of this competition.

“The captains and all of the girls have worked really hard on getting their routines choreographed and received good comments from the judges,” said DeMers.

The coach added: “We will continue to work on making movements sharp, clean and synchronized and keeping up our energy throughout the performance.” 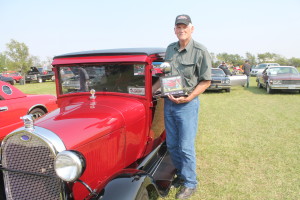 Chuck Oster of Mitchell won the best of show at the Prairie Cruisers car and tractor show on Sept. 2 in Winner.

Oster’s winning vehicle was a 1928 Ford Model A Tudor.

The tractor winner went to John Tunnissen with a 1954 John Deere.

There were 69 entries in the car show held at the Tripp County Historical Society Museum.

The scholarships cover tuition and fees, books, equipment and other related program expenses for eligible programs with eight high need industry areas at South Dakota’s four technical institutes. Recipients were selected from a total of 1,028 applications.

The Build Dakota Scholarship program was announced in late 2014. The scholarship is funded by a $25 million donation from T. Denny Sanford and $25 million in future funds committed by Gov. Dennis Daugaard.

Scholarship recipients must commit to stay in South Dakota to work in their field of study for three years following graduation. 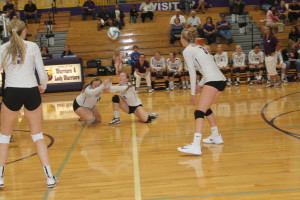 Sam Marts, Abby Marts and Gracie Littau were all 100 percent in serving.

Alexis Richey was 72 percent in serve receive. She was also the leader in digs with 14 and Hammerbeck and Abby Marts had 12 each.

Sam Marts had a solo block and 2 block assists. Hammerbeck had 1 solo block.

The next action for the Lady Warriors will be Sept. 16 in Ft. Pierre at the Big Dakota Conference meet.

On Sept. 18, Winner will host Mobridge/Pollock.