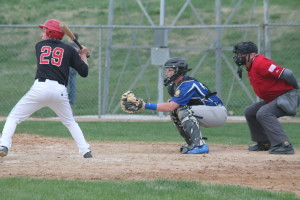 At the plate, Calhoon had 3 singles, 2 runs scored, 2 RBIs and 3 stolen bases.  DeMers had 2 singles and 2 RBIs.  Holden Thieman and Levi McClanahan each had doubles. 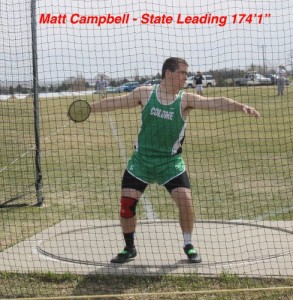 The Colome senior won first place with a throw of 174-1, setting a new Colome school record.

This is Campbell’s personal best and he is leading the state in all classes in the discus.

The Cowboys placed fourth at the meet.

Other results of the Cowboys include: 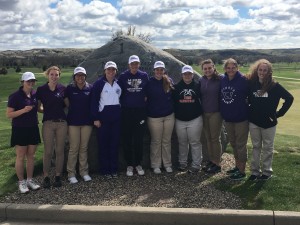 Ronae Klein led the Lady Warriors as she placed second with a 96.

The next meet be April 28 at Gregory. 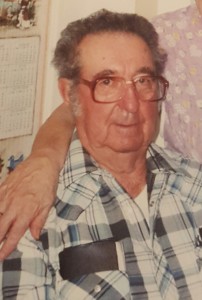 Patrick James O’Bryan was born April 10, 1931 at the homestead in Mellette County near Wood, SD to Boyd M. and Theodoshia “Doshia” [Eastin] O’Bryan. The family lived here for a few years then moving to another place in the same area. Pat attended country schools for the lower grades, then went to Winner High School for two years and continuing at Colome High School for the following two years, graduating in 1949.

Pat worked on area farms and ranches for a few years before enlisting in the United States Army and serving in Korea. When he returned from his military service he married Ethel E. Steele in Clearfield, SD in the summer of 1954.

One daughter, Lorinda Lou was born to this marriage in 1958. Pat worked on area farms and ranches in Tripp County until 1963 when he bought a ranch north of Hot Springs, SD bordering the Wind Cave National Park. He worked part-time as a bartender for about 4 years in Hot Springs while ranching and then worked on road construction in South Dakota and Wyoming. Pat was divorced in 1969.

In 1973 he married Carole A. Fleming in Rawlings, WY where they worked on road construction for a few years. In 1982 the bought a bar, restaurant, and campground [Pat’s Place] south of Hill City, SD which they operated for 10 years. In 1992 they sold Pats Place and semi-retired back to the ranch north of Hot Springs. They then bought a bar in Hot Springs called the Red Eye Saloon and ran it for a few years until they sold it and moved back to the ranch full-time. He sold the ranch in 1996 and they moved into a house in Hot Springs. 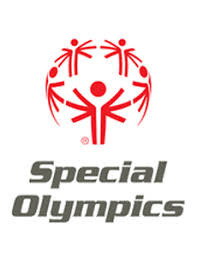 The Mission spring games of the Special Olympics of South Dakota will be held April 26 in Mission from 12:30 to 3:30 p.m.

There will be approximately 105 participants at this event.

The state summer games will be in Spearfish May 18-20.

South Dakota’s average pump price has risen four cents over the week and dropped one cent from yesterday after rising for much of April, according to GasPrices.AAA.com.

“Between the first of April and April 14, the state average price for a gallon of regular rose 9 cents, coming in at $2.40 per gallon on April 14, the high for the year,” said Marilyn Buskohl, spokeswoman for AAA South Dakota. “We expect retail gas to trend upward as we approach the start of summer. How much they rise depends largely on market forces occurring on the other side of the globe.”

Today’s national average price for a gallon of regular unleaded gasoline is at its highest price this year and has now increased for 20 consecutive days. Pump prices in 43 states and Washington D.C. have moved higher over the last week. This increase was most prevalent in the East Coast region where refiners wrapped up seasonal turnaround resulting in significant prices increases last week. 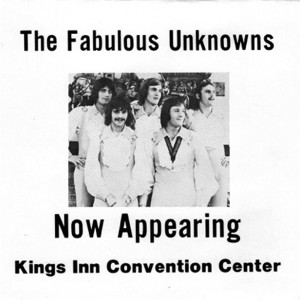 A Winner band has been chosen to be inducted into the South Dakota Rock and Roll Music Hall of Fame.

The Fabulous Unknowns of Winner will be inducted on April 22 at the Ramkota Exhibit Hall in Sioux Falls.

Taylor and Obert were from Colorado Springs, Colo., and the rest were from Winner.

Many of their fans called them the Unknowns, so they soon added the “s” to their name. They played a variety of music styles from pop songs of the 1940s through the Tijuana Brass, Everly Brothers, Chicago and the Doobie Brothers.

They learned songs their parents liked.

The Fabulous Unknowns were managed by S. P. O’Malley, who had moved to Winner from Yankton. He crafted their clean image, never allowing them any smoking or drinking from the stage. They always tuned their instruments before going on stage. This was more of a show band than a dance band.

The band members wore tailored suits and were known for their colorful clothes. Their first gig was in the summer of 1972 in Dallas. That is Dallas, S.D., not Dallas, Texas. At their second stop at the Purple Turtle in Sioux Falls they were billed as “direct from Dallas.”

The Fabulous Unknowns performed outside of South Dakota but the Holiday Inns of Sioux Falls, Mitchell, Pierre and Spearfish were their repeat venues.

The Kochi Inn in Yankton was also a favorite spot for the band.

In April of 1974 their finals shows were at the Crest Show Lounge in Spencer, Iowa.

Fun always was their priority and it showed through their appearances. Many of the members still are active musicians. 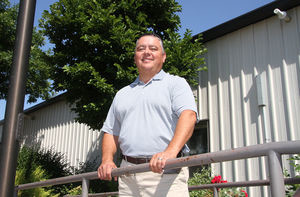 The awarding of both the Frank Yaggie Award and the Cornerstone Award by the Yankton Chamber of Commerce have become highlights of the annual Chamber banquet.

However, this year, it earned even more significance as the two awards were combined and presented to Dr. Wayne Kindle, superintendent of the Yankton School District, formerly of Winner.

Kindle is a graduate of Winner High School and his wife, Marge (Olson) is also from the Tripp County area.

“The first thing that came to mind when I was standing up there and hearing some of the things they announced that I had done, is that this is really a shared award in my mind,” Kindle said. “There are lots of great people in this school district and in this community that do so many great things, and I have just been lucky to be a part of those things — not by myself, but working side by side with people. While I am honored, I am humbled and I recognize that when an individual gets an award like this, it isn’t about me. It is really about all the other people who have involved in making a really great thing happen not only in Yankton but in the school district.”

According to the Chamber, the award winner must make significant contributions to the community by selfless acts of time and contributions throughout his or her life in Yankton. That vision and dedication to the betterment of the community must be evident through their daily lives, civic involvement and professional service. The individual must also contribute to the growth and success of Yankton.

“I was more than surprised getting the award,” Kindle said. “That I was chosen for something as meaningful as the Frank Yaggie/Cornerstone Award, particularly given that they had combined the two for the first time, I am honored. I finally had an opportunity to sit down and see what the two awards represent and the names that are on those lists, and I am really honored to be on both of those lists.”

“Just that large opportunity to get out there and be part of many things that are not only going to help the community, but also our kids, is very important to me,” Kindle said. “(It’s about) what kind of legacy we are going to not only leave for our kids, but also build for their future — and I have some ideas.”

He said walking in the path of past and current Yankton leaders is also a challenge to do more.
“If you go back to Marian Gunderson, who is on that list of winners, when I first moved to town, it didn’t take me long to figure out that a person like her does things and gets things done. They are all very good things for the community and our kids. So, when I think of her and all of the (past winners) of those two awards, the one common thing that I believe they all share is they all really believe in Yankton. They are advocates for kids and they want to see us do some remarkable things moving forward. They are thinkers and planners — forward thinking people.”

He said they also had another quality in common, they need to share any recognition received with others.

“For them, it wasn’t about themselves, rather it was about what they could do for others,” Kindle said.

That is a lesson he said he learned at a young age.

“Growing up in my personal life, I didn’t have a lot,” Kindle said. “I am not embarrassed to say that. In fact, I learned a lot about making the most of what you do have. I will probably not have the resources that I would like to have to give to others and to give to causes. But, I know two things for sure: That my wife, Marge, and I give what we can and from our heart. I also know I am going to continue to give my time, which I encourage everyone to do. We are all blessed with time and the ability to help others with our time.”

Two Tripp County men were arrested for allegedly taking thousands of dollars worth of milo from an area grain elevator.

Rodney Farley, 55 and William Whitaker, 54, both of Witten, were arrested in March and charged with taking $9,000 of grain from the Witten Elevator.

On Feb. 19, Whitaker allegedly loaded up to four loads of milo onto a semi truck operated by Farley who delivered the milo to Dakota Mill and Grain in Presho under the name Advanced Grain Pricing.
Whitaker was arrested on March 1 and allegedly told law enforcement he expected to receive “a couple thousand dollars” from Farley after the deliveries were made, court documents state. Whitaker said he did not receive payment and he regretted the decision.

A warrant was issued for Farley and he was arrested a couple of weeks later.

Farley is charge with grand theft by receiving stolen property and Whitaker is charged with grand theft by embezzlement. Valued between $5,000 and $100,000, charges are Class 4 felonies, punishable upon conviction by up to 10 years in prison and a $20,000 fine. Farley also faces an alternate count of grand theft.

Bond for both men was set at $500 and both have been released.

Farley and Whitaker are scheduled to appear in court in May. 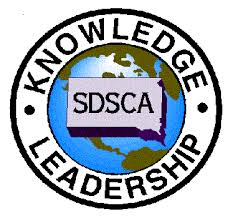 Focusing on the theme “Lead Us West” the convention utilized a combination of breakout sessions and large group instructional presentations by their guest speaker and workshop presenters, which were focused on different aspects of leadership.

The convention also featured a state-wide community service project. This project made over 60 fleece blankets that will be distributed among communities throughout the state.