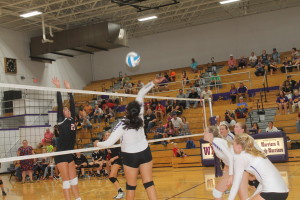 Gracie Littau and Abby Marts were 100 percent in serving.

Hammerbeck was 100 percent in serve receive and Richey was 90 percent.

“We came out ready to play from the start,” said coach Jaime Keiser.

“We did a great job of serving and attacking the ball which kept Lyman out of system. We lost focus in set 2 and 3 and gave Lyman too many unearned points. I was proud to see us battle back and play together as a team and not keep playing at their level. We did a better job of serve receive which has been our weakness,” said Keiser.