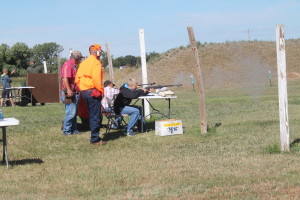 The Tripp County shotgun and muzzleloader shooters concluded the 2018 shooting season in Mitchell on Sunday Sept. 9 at the Mitchell gun club at the State 4-H match. It has been a terrific and fun year for the shooters.

In the senior division the team consisting of Tane Pravecek, Wade McClanahan, Jesse Larson and Austin Olson took 1st place in the skeet competition and 2nd place in sporting clays. Also in the senior division the team of Luke Hennebold, Jack Ducheneaux, Caleb Vandenbark, and Parker Baker won 4th place in skeet, 1st place in sporting clays and 4th place in trap. Caleb Vandenbark was one of four shooters in the state chosen for the 2019 shotgun team to go to the national shoot in June of 2019. In the qualifying matches that took place over the summer Jude Sargent was 1st place in match one with a perfect 25 and Katie Welker was 3rd place with a 22/25. In match two Luke Hennebold was 1st place with a perfect 25 and a streak of 51 targets hit.

Tripp County had 3 muzzleloader shooter attend the state match. Parker Baker, George Clark and Hunter Shippy. George Clark was the 3rd place junior shooter and Parker Baker was the 5th place senior shooter. Parker Baker was named to the team to go to the national shoot in June of 2019. The coaches for the shotgun shooters are Tim Pravecek, Mike Pravecek, Rod Clark and Robert Daughters. The coaches for the muzzleloader shooters are Carmen Baker, and Ray Neyens.