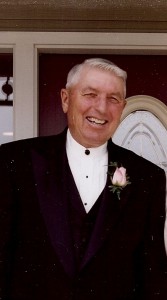 Ivan Frank Vosika was born on February 20, 1934 to Stanley and Ona (Stasney) Vosika. Ivan was raised on the farm near Gregory and lived there all his life. As a young boy, Ivan was stricken with rheumatic fever making school difficult. With the help of his mother reading to him by lamp light, Ivan finished the eighth grade and then later obtained his GED.

Ivan married Shirley (Boes) in September 1962 in Gregory, SD along-side her sister Nola Jean in a double ring ceremony. Together they raised three children, David, Lori, and Dan. Ivan and Shirley enjoyed 54 years together, all on the family farm.

Through long hours and hard work, Ivan and Shirley developed and expanded their farm to include a large dairy and livestock operation. Ivan was an industrious and creative mechanic who had the unique ability to fabricate things on the fly to keep his operation running smoothly. Had health not interfered in his later years, Ivan would still be doing what he enjoyed most, windrowing and baling the hay fields.

In addition to farming, Ivan had many interests. He wasn’t afraid to create and live a dream and be involved. He obtained his pilot license at a young age and purchased his first plane in 1951. For over five decades, Ivan was active with other pilots in Gregory, forming a flying club and giving rides to area children at the numerous hanger parties. He spent countless hours scouting local shelterbelts and abandoned farms by air, searching for old tractors around South Dakota and Nebraska. Many times he would land on a country gravel road, taxi up to the target and inquire about the availability of it. He also flew to many air shows and enjoyed with Shirley many flights to area towns with other flying couples, simply to have breakfast.

During this time, Ivan also became a serious collector of antique John Deere tractors. He took great pleasure in sharing the love of restoration with friends who would spend many hours with him in the tractor shop. He won many awards with his tractors and enjoyed showing them during parades. He attended many tractor flea markets and pulls. He also enjoyed his collection of “retired” family automobiles. Most dear to his heart was his beloved 1960 Chevrolet Impala which he purchased new. It became not only he and Shirley’s courting vessel, but later the family car; and then finally a source of pride and a connection to his earlier years gone by.

Ivan was also active in the community by serving on the Rhoades Township board, the ASC board and was on the Gregory Farmer’s Elevator board of directors for many years. He was a long time member of the American Legion.

Ivan was known to lend a helping hand to his neighbors, friends and family, made many friends in his life adventures and thoroughly enjoyed round table discussions at Mr. G’s in his retired years. And, rarely a Sunday would pass where he didn’t pay a visit to someone known to him who was hospitalized or in assisted living. He was ready with a smile, enjoyed sharing a laugh and was quick witted when least expected.

Ivan enjoyed seeing his four grandkids. They will miss his physical presence but are gifted with knowing grandpa’s influence is ever present about the farm.

Ivan is now in a place of peace playing pitch, drinking coffee and surrounded by his favorite farm dogs. He is reunited with all those who made his life so special, while those left behind treasure the life of Ivan well lived.