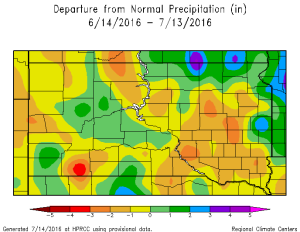 The U.S. Drought Monitor has shown increases in drought area and severity throughout South Dakota.

Edwards explained that the warm and dry conditions of the last month drove a rapid increase in drought. Many western and northeastern South Dakota locations ranked June 2016 among the top five warmest on record.

Edgemont and Hill City recorded the warmest temperatures seen in more than 30 years. Camp Crook, Lead, Mt Rushmore and Summit ranked this June as the second warmest on record. “These stations have 55-109 years of record and were between 4.35 to 9.28 degrees above average for June 2016,” Edwards explained.

July 2016 Outlook
Fifteen climate stations in South Dakota ranked June 2016 among the top five driest on record. Interior and Waubay had their driest June in more than 60 years, with 0.61 and 0.75 inches of rain. Other stations that were exceptionally dry included Alexandria, Edgemont, Philip and Ashton.

The climate outlook for July 2016, also updated on June 30, shows an increase in likelihood of warmer than average conditions for the month ahead.

“It is not clear yet if it will be near record warmth as we experienced in June 2016,” Edwards said.

She added that the precipitation outlook for July 2016 indicates equal chances of being wetter, drier and near average conditions.

“Summertime precipitation can be challenging to forecast as thunderstorms can produce locally heavy rainfall,” Edwards said.

Some drought impacts have already been reported across the state.

“Notably, dry vegetation in the western counties has increased the risk of wildland fire and grassland/prairie fire,” Edwards said. “Several small fires have already been reported due to hay baling and other related activities.”

Water Quality
Water supply and quality has also been a concern in agricultural areas. Producers with stock ponds and other surface water for livestock should be aware of potential unhealthy water quality, and have their water tested for Total Dissolved Solids.

In cropping systems, crops being cut for hay due to the drought conditions can also be tested for nitrates.

“In some eastern counties, early drought stress has been noted in corn and soybeans with leaf curling and poor/slow growth,” Edwards said.

She added that the lack of moisture will have a substantial impact soon if conditions do not change, as corn typically enters pollination stage in early to mid-July.

“Drought stress during that time can have a large impact on yields,” Edwards said. “The dry conditions however, have also reduced weed and disease concerns in cropping systems.”