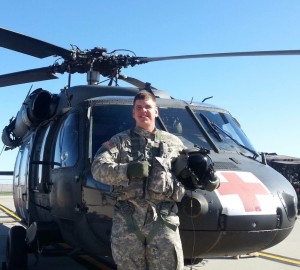 Avera Gregory Hospital Administrator Anthony Timanus departs his role as leader of the health care facility to return to a role he knows well.

The father of five will begin a one-year deployment to Southeast Asia where he’ll serve as company commander of C Company, First Battalion, 189th Aviation Regiment of the South Dakota Army National Guard. Timanus, who has held his position with Avera Gregory for six years and who also serves as administrator of Rosebud Country Care Center – Avera Health, said his unit will provide medical evacuation services to U.S. and allied forces in his area of operations.

Timanus, a U.S. Army Major, leads a unit that consists of 139 soldiers and 15 aircraft. He said considering this is his first deployment 10 years, he’s assured in those who will continue care in his adopted hometown.

“I served 11 years of active duty and deployments are hard, but my wife, Karen, and I are in a good place. She has a lot of family here to provide support,” he said. “I feel better about this one compared to others. I am indebted to Avera leaders as well as my Gregory team.”

Bryan Breitling, CEO of the Avera Hand County Memorial Hospital in Miller, S.D., will serve as interim administrator of Avera Gregory. Breitling, who aided Timanus during his career start with Avera in 2011, said he’s done well for the community and the hospital.

“Anthony’s deployment demonstrates his willingness to serve our nation as well as our health system,” said Breitling. “I’ll split time between Miller and Gregory and have full confidence. I look forward to supporting its excellent work. Gregory has dedicated staff across the board.”

Katie Biggins, RN, Avera Gregory Director of Clinical Services, said Timanus will certainly be missed. She helped more than 150 staff and family surprise him with a party the week before he departed.
“Tony’s a commendable leader; we all wish him well in his mission,” she said. “We have a lot of pride in his service and sacrifice. We all look forward to welcoming him back once he’s finished.”

Curt Hohman, Avera Senior Vice President for managed facilities said Avera’s focus on serving others is embodied in Timanus’ sacrifice.
“We wish Tony the best on his deployment and realize his dedication to his country and to us is exemplary,” said Hohman. “We know he’s setting a great example through honoring his commitment to our mission as well as his military mission. We applaud him for serving and thank him for that level of unselfishness.”

Timanus said he’s felt honored to Hohman and his entire Avera team for its unyielding support.

“They have shown a commitment to me throughout my Avera career and I appreciate that support, as does my family,” he said. “Bryan will do a great job and not much will change – the excellence in care will certainly not falter. They will be in great hands.”