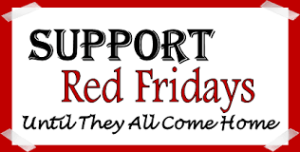 South Dakota employers, schools and residents are encouraged to show their support for all service members deployed overseas by participating in R.E.D. (Remember Everyone Deployed) Shirt Friday.

The South Dakota National Guard, Ellsworth Air Force Base and the S.D. Employer Support of the Guard and Reserve invites the public to participate by wearing a red shirt on all Fridays while South Dakota citizens are deployed to remember and honor all members of the military for their service to the state and nation.

An Aug. 25 R.E.D. event is being held to highlight the nearly 125 members of the South Dakota Air National Guard’s 114th Fighter Wing currently deployed overseas. Throughout the past year, the SDNG has been highlighting deployed units and individual members during R.E.D Friday events.

“Wearing red shirts on Fridays sends a strong and unified message to our service members and families that they are not forgotten and we appreciate their sacrifice to our country,” said Maj. Gen. Tim Reisch, adjutant general of the SDNG. “Wearing a red shirt is a simple gesture, but the meaning behind it is significant.”

Gov. Dennis Daugaard has demonstrated his support by signing a proclamation announcing all Fridays that South Dakota citizens are deployed in harm’s way to be R.E.D. Shirt Friday in South Dakota.

South Dakota employers, schools and citizens are encouraged to provide additional support by:
* Sign a Statement of Support through the ESGR to show your support (for more information about this please contact MAJ Lona Christensen, SD ESGR Program Director, at 605-737-6540)
* Sending cards/letters to the unit or someone in the unit
* Create a banner or video from your organization to send to the unit
* Check in with the family of a deployed service member
* Provide a meal for a family of a deployed service member
* Use the hashtag #RememberEveryoneDeployed when posting your pictures to social media sites
* Send a picture of your company to redshirtfriday.southdakota@gmail.com and we may share your picture through our social media sites
* Support the S.D. Veteran’s Home in Hot Springs or a veteran service organization in your community

Currently, there are more than 300 South Dakota Army and Air National Guard members and about 550 Airmen from Ellsworth Air Force Base deployed to various location around the globe.