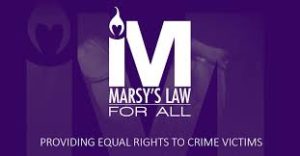 All registered voters get to decide on June 5 whether South Dakota Constitution should be changed regarding victim rights.

The question is whether guarantees now reach too far, after voters adopted Marcy’s Law in the November 2016 general election.

The legislature decided voters should consider the matter again. State lawmakers in the senate voted 27-8 and 61-6 in the house to put another set of changes on the June ballot.

Among those asking the rights be reined back somewhat are county sheriffs and county prosecutors.

The state’s four largest counties spent $500,000 in the years after the amendment took effect aiming to comply with its requirements.

If approved, the amendment would narrow the definition of victim under the state’s constitution and require that those impacted by criminal offenses opt into special protections.

The amendment would also shrink the pool of family members that can receive victim protection status under law and allow law enforcement officers to share more information about unsolved crimes.

The proposal will need a majority vote to be approved. If that happens, the measure will take effect on July 1.