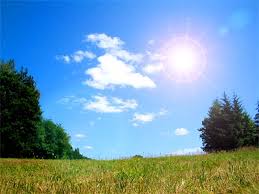 After a near-record cold April, May 2018 is off to a warmer than average start across much of South Dakota.

“It appears as if this trend will continue into June, as the dive into summer continues,” said Laura Edwards, SDSU Extension State Climatologist.

In fact, temperatures across the state were above average for the first 16 days of the month.

“Most locations were two to five degrees warmer than usual for this time of year. A handful of locations in the Black Hills, south central and northeast have been more than five degrees above average so far,” she said.

The National Oceanic Atmospheric Administration (NOAA) Climate Outlook for June 2018, released May 17, leans towards warmer than average as well. “Current forecast projections show very good chances that the end of May and early June will be warmer than typical for this time of year in the Northern Plains,” Edwards said.

Rainfall across South Dakota, as of May 17 has been variable, with the southeast portion of the state experiencing especially wet conditions, which brought many rivers to flood stage in early May.

“The eastern rivers have receded now that all the snowmelt has runoff, but water is still high after some recent rain events,” Edwards said.

There have also been some local rain events in west central and northwestern counties, but the total for the last two weeks is only about an inch to 1.5 inches.

The southwest and northeast continue to be the driest areas of the state in the last one to two months.

“A look ahead into June’s climate outlook does not provide much information for precipitation. The latest map shows equal chances of drier, wetter and near average moisture for the month ahead,” she said, and explained that this is not unusual for the Northern Plains. “It is often difficult to predict spring and summer season storms. This is good news, and bad news, for those who are dry in the north, but also those that are too wet in the south and want to make some more progress in planting, fertilizer and early pesticide application.”

The U.S. Drought Monitor map, released May 17, shows that a new area of moderate drought was introduced in northeastern South Dakota, along the North Dakota border.

“This area has been much drier than average for the last 30 to 60 days. Soil moisture is also dry for this time of year,” Edwards said. “This has allowed spring wheat, corn and soybean planting to move ahead rapidly, but continued rainfall will be crucial for the rest of the spring season.”

In the west, despite some recent precipitation, Edwards explained that it has not yet been sufficient to bring the area completely out of drought. “Moderate drought remains over a large area of western South Dakota,” she said. “Stock ponds filled with early spring runoff, but grasses and pastures will need more time to recover from the last one to two years of drought. This area has overall been slightly drier than average since April 1, which is a critical moisture period for cool season grasses.”