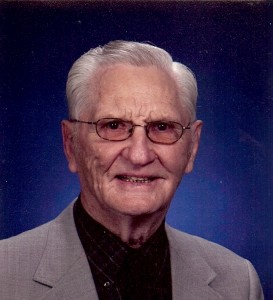 George Allen “Bud” Rajewich was born Feb. 21, 1921 to John and Mary (Molacek) Rajewich at his parent’s home northeast of Gregory, SD. He was the youngest of thirteen children.

Allen attended country school #42 and Gregory High School, graduating with the class of 1938. He excelled in basketball and the team played in the state tournament that year. After graduation he remained at the family farm to help his parents until they retired. He loved to hunt and fish and to reminisce about the Saturday night dances at the big Rajewich barn. Several of his cousins played in the band.

On March 27, 1945 Allen was united in marriage to Gladys Herrmann of Millboro, SD at St. John Lutheran Church in Gregory. They made their home a short distance south of Allen’s birthplace. A daughter, Janice Elaine, was born to this union.

In 1945, Allen was baptized and confirmed in the Lutheran faith and remained a member of St. John’s the rest of his life. Through the years he served as trustee, financial secretary and treasurer. Allen helped organize and construct the rural Landing Creek Telephone Company in the 1950’s. He served as lineman, director, and treasurer until the company was sold to Northwestern Bell in the 70’s. He also served on the rural school board.

In 1981 he semi-retired and they moved to their new home in Gregory. He rented the farm out but continued to take an interest in the land and helped out wherever needed. After they sold the farm in 1989 he kept busy by doing yard work, repairing his grandchildren’s vehicles, and having coffee with his friends. After Gladys retired they enjoyed traveling.

In 2015 they relocated to Pierre after selling their home in Gregory.

Allen had a quiet, gentle quality about him. He was a good neighbor and a loving, devoted husband, father, and grandfather.

He is survived by his wife Gladys of 72 years, one daughter Janice, seven grandchildren Douglas, David, Daniel, Dawn, Dennis, Denise, and Darin and their spouses, and by 18 great grandchildren, one great-great grandchild, a brother-in-law Vernon Herrmann, and many more relatives and friends.

He was preceded in death by his parents, brothers Joe, Adolph, Jack, Bill, Ed, and Raymond, sisters Clara Campbell, Alma Hennrich, Erma Schwaryer, and sisters Helen, Lillian and Evelyn at a young age.