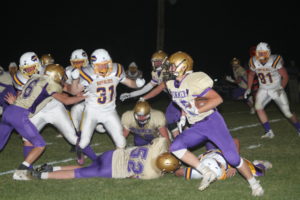 Big plays were the key to Winner’s victory in the first round of the playoffs Thursday night in Winner.

The Warriors rolled to a 54-0 victory over Stanley County. The game ended at the half due to the mercy rule.

Winner will play in the Class 11B quarterfinals which will be Oct. 26 at 6 p.m. in Winner. The Warriors will host Bridgewater/Emery-Ethan.

To honor his memory, prior to the game the football team released 66 balloons. Watzel’s jersey number was 66.

In Thursday’s first round of the playoffs, the Warriors got off to a fast start scoring 38 points in the first quarter.
On the second play, Riley Calhoon scored on a 53 yard run.

Midway into the first quarter, Calhoon scored again on a 20 yard run.

With 3:46 left in the first, Matt Smither punched the ball in from 9 yards out.

Brady Fritz picked up a punt return and ran it in for a 61-yard touchdown.

Shortly after Fritz’ score, Shea Connot intercepts a Buffs pass and runs it in for the touchdown.

Trevor Peters scored two touchdowns in the second quarter. He scored on a 4 yard run and a 3 yard run.

The Warriors had 13 first downs and held Stanley County to five.

Winner had a total of 264 yards rushing. The team was led by Calhoon with 96 yards, Peters, 84 yards; Phillip Jorgensen, 27 yards and Zach Lapsley, 21 yards.

“We thought going in the start of the game was going to be important,” said coach Dan Aaker.

“We played well and with a lot of energy.”

The coach said he was happy with the play of the defense.

Winner, the two-time Class 11B champion, will have the opportunity to play in front of the home fans on Oct. 26.

Aaker says last year in the semifinals, BEE gave Winner one of its best games. They return a lot of athletes from that team.

Both teams come into this game on Thursday with a 7-2 record. BEE’s only two losses are to Madison and Sioux Valley.

“We will have to have a good week of practice. We will be excited to play them,” said Aaker.

Note from Thursday’s game Oct. 19 marked the one-year anniversary of Taylor Watzel’s death.  To honor his memory, prior to the game the football team released 66 balloons. Watzel’s jersey number was 66.