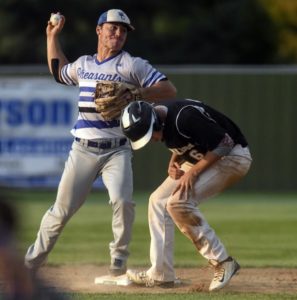 In the sixth inning, Harter capped off the scoring with a three run double.

The Pheasants scored two more runs in the seventh inning and three in the eighth.

Parkston scored five runs in the bottom of the eighth inning.

J. J. Farner earned the win on the mound striking out six batters.

Winner/Colome Pheasants defeated Wagner 16-6 in a Sunshine League amateur baseball game on Thursday. The game was called after the seventh inning.

Drew Weber earned the win after striking out six batters and giving up six runs in six innings of pitching.

Winner/Colome will host Mount Vernon on Thursday in Winner.