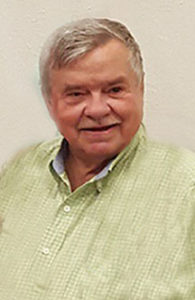 Donald Covey, 73, of Winner, SD passed away on Monday, June 11, 2018 at the Sanford USD Medical Center in Sioux Falls, SD.
Mass of Christian Burial was held on Saturday, June 16, 2018 at 10:30 a.m. at the Immaculate Conception Catholic Church in Winner. Burial followed in the Winner City Cemetery. A visitation was held one hour prior to the service.

Donald Eugene Covey, born on Jan. 28, 1945, in Winner, South Dakota, died on June 11, 2018, in Sioux Falls, SD, surrounded by his loving family. He was the fifth child and second son of Chester and Winnifred (Ferguson) Covey. He grew up in the Hamill and Winner area, graduating from Winner High School in 1963, the Homecoming Warrior. He lettered in football, basketball, and track and once hit the centerfield fence at Leahy Bowl on a 3-2 pitch.

On June 11, 1965, he married the love of his life, Vicki Hruska. He graduated from USD with a degree in government in 1967 (a Farber Boy). After a time farming with his dad, he answered the call of the public service and he entered USD Law School. He graduated in 1973, having served as the Copy Editor of the USD Law Review, and moved to Aberdeen to be one of the first law-trained magistrates. He entered private practice for a time in Aberdeen and then moved to Winner, SD, and practicing for 41 years, taking his turn serving as Tripp County State’s Attorney and doing his share of court appointed defense work.

Don believed in serving his community. He was a member of the Winner School Board, Rotary, Winner Investment Club, the Hamill, Clearfield, and Keyapaha Conservation Districts, among many other organizations. He was active in the South Dakota State Bar and Rosebud Bar Associations, serving on many committees, including but not limited to the Ethics, ALPS, and Victims/Witness committee. One of his proudest accomplishments was bringing medical professionals to rural areas through the Regional Primary Medical Search.

In his youth, he loved athletics, including handball, golf, bowling, and racquetball. He loved fishing and hunting with his family, mostly for the companionship of family and friends. He loved music and was a gifted singer. He sang at countless weddings and funerals, providing comfort and joy to many. He served as a cantor, Eucharistic minister, lector, and Parish Commission member of the Immaculate Conception Catholic Church, and was honored to be chosen as cantor for the Rapid City Diocese Centennial Mass. Don greatly enjoyed singing with barbershop choruses in Aberdeen and Winner. Leading his fellow Rotarians in song was a highlight of his week.

In addition to the law (he carried a copy of the United States Constitution with him), he loved and cherished his family, who loved him right back.

He is survived by his wife of exactly 53 years, Vicki, his children: Chet and Jamie (Bradley, Zachary, and Abby); Tom and Amy (Hannah and Faith); Paul and Andrea (Emmalynn, Hyatt, and Willa); and Heather and Bill Feller (Lonnie and Mellissa and Stetson and Natalie); Siblings: Della (the late Harry) Snethen, Bob (the late Barbara), Donna and Bill Bunn, Shirley and Denny DeMers, and Gwen and Jack Ragsdale; dear cousin and friends Bill and Joan Ferguson; many cousins, nieces, and nephews.

He was preceded in death by his parents, his sister-in-law Barbara, his brother-in-law Harry, and nephews David and Randy, and countless other family, clients, and friends.

May the choirs of angels come to greet you.
May they speed you to paradise.
May the Lord enfold you in his mercy.
May you find eternal life.