Five members of the Winner High School volleyball team have been named to the academic all-state volleyball squad.

The honor squad was announced by the South Dakota Volleyball Coaches Association. Girls on the all-academic team must have a 3.5 or higher grade point average and must have played or managed at least three years of high school volleyball. 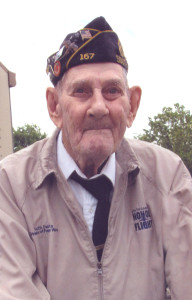 Rex D. Garner was born December 24, 1926 at the Gardner Homestead 9 miles North of Witten, SD. He was the only child born to Ralph and Leta (Boyd) Gardner.

Rex grew up in Greenwood Township in northern Tripp County. He attended South Greenwood Country School and graduated from Winner High School in 1944 at the age of 17.

When Rex turned 18 he enlisted in the Army in 1945 and was stationed in Berlin, Germany where he was assigned to guard German soldiers. While there he played saxophone in a 15 piece band. Rex was honorably discharged in November 1946.

After being discharged from the Army Rex played music with the Buddy Baer Band, traveling from state to state from 1946 to 1952. While playing music in the Winner area, he met Fairy (Cookie) Cook. After dating for only 3 months they were united in marriage on April 18, 1952, and made their home on the farm north of Witten and later moved to Witten. To this union 5 children were born: Scott, twins Bobby and Billy, Sherry, and Barry.

Rex farmed from 1952 to 1985 until he became employed by the Tripp County Water Users District in 1986. He retired in 2003. Retirement wasn’t for Rex and he returned to the workforce until 2011 where he was employed by the Green Thumb Program with the Witten School, the Grossenburg Memorial Library, and Kucera Electric. Rex continued to play music with local bands such as Wickham Brothers and Vic’s Combo.

Rex will be remembered for music, patriotism, baseball, pheasant hunting, the outdoors, and the love of his wife, children, grandchildren, and great-grandchildren. He was an avid reader, loving to read and re-read the Louie L’Amour Collection books. He was an avid sports fan that never missed his children’s sporting events. Rex never met a stranger and could talk with anyone. He will be truly missed.

Funeral Services for 51 year old Jay Wernke of Gregory, SD will be held on Thursday December 10 at 10:30 AM at United Methodist Church in Gregory, SD. Burial will be at 2PM at Rosebud Cemetery in Bonesteel, SD. There is a Prayer Service Wednesday night at 7 at the church.

Bernice married George Gillespie on May 23, 1936, in Springview, Neb. From this union, four daughters were born. This marriage later ended in divorce.
Bernice moved to Valentine, Neb., where she met Frank May. They were married on Sept. 15, 1951, in Bridgeport, Neb. This union bore two sons. Bernice and her husband operated May Trucking for nine years before acquiring a ranch near Keypaha, S.D., in 1959. They worked the ranch until 1981, when they retired to Burke, S.D., and lived at this location until 1994, when Bernice and Frank moved to Clarkston.

Bernice was a dedicated ranch wife for 21 years and worked as a nursing assistant and elderly caretaker for 30 years. The elderly care facilities were in Winner and Gregory, S.D., and Clarkston.

Bernice’s hobbies were focused on caring for her family, but she did enjoy golf and crocheting. She was a very family oriented, compassionate, loving mother of six children.

Lowell Henry Wiedmann was born October 28,1937 to Fred & Irene (hoffman) Wiedmann in their farm home near Dixon south Dakota. He attended 1st-8th grade in the one room country school in Dixon. He started high school at Gregory South Dakota. He was confirmed in the Lutheran faith at Trinity Lutheran Church in Dixon March 1955. As he was growing up on the farm he would help with various jobs. He entered the Winner Regional long term care center on November 24, 2008. He passed away at the Winner Hospital on November 26 2015 at the age of 78.

South Dakota’s public universities retain nearly three-quarters of their home-grown graduates in state, according to the latest Board of Regents’ placement study. The report was delivered to the regents at a meeting this week in Spearfish.

An analysis found that 73.7 percent of in-state public university students were placed in South Dakota the year following college graduation, either to work or to pursue additional postsecondary education. For out-of-state students completing degrees at South Dakota public universities, the percentage that remained was just over 33 percent.
“Clearly, the public university system must take the lead in working to meet the state’s skilled workforce needs,” said Mike Rush, the regents’ executive director and CEO. “Our universities already are hard at work to build the state’s supply of human capital.” As a starting point, Rush said the regents decided earlier this year to look at a statewide attainment goal of 65 percent of South Dakotans, ages 25 to 34, holding some type postsecondary credential by 2025.
Rush noted that the in-state graduate placement rate has climbed steadily, as more students complete their studies, graduate from the state’s public universities, and make a choice to remain here. Data indicate that nearly 1,000 additional graduates were placed in 2012-13 compared to the number placed seven years earlier.

The top-two industries where graduates found employment in South Dakota were health care (29.1 percent) and educational services (20.7 percent). Several of the highest-ranked employment sectors that South Dakota graduates entered also correspond to industries projected by the state labor department to be in high demand for employment through 2022.

For those college graduates who continued on for post-graduation education, nearly 70 percent enrolled in a South Dakota institution, according to the study.

The placement study examined data sets from the Board of Regents, the South Dakota Department of Labor and Regulation, and the National Student Clearinghouse to determine the extent to which public university degree completers were retained in state after graduation.