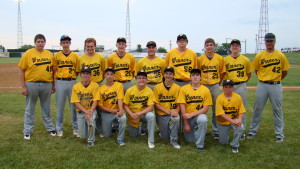 Winner will be hosting both the Junior Teener (14U) and varsity Teener (16U) regional tournaments at Leahy Bowl.

The Region 6A Junior Teener tournament will be a 3 team round robin beginning on Friday, July 15 with the following schedule:

If all 3 games go 1-1 on Friday the VFW pool play tie breaker will be used to determine the top two teams who then play in a one game championship on Saturday, July 16 at 1 p.m.

The Region 6A champion will earn a berth in the VFW Junior Teener state tournament to be held in Dell Rapids July 22-24.

Winner is co-hosting the Region 7A varsity Teener tourney with Mission. They elected to use their host turn and play it at Leahy Bowl. That tournament will start on Friday, July 29 and will be a four team double elimination. There will be four games on Friday and two on Saturday and if necessary, a game on Sunday.

The Region 7A champion will earn a berth in the VFW Teener state tournament to be held in Lennox Aug. 5-7.