Lady Warriors Rise to #2 in Class A 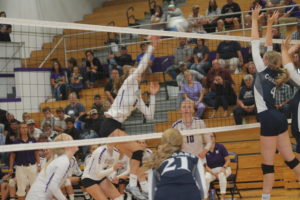 “Burke is a good team and brought back quite a few from last year,” said coach Jaime Keiser. “They have a very balanced and athletic tam. We came out ready to play and did a great job of being aggressive attacking and serving,” said Keiser.

The Winner coach noted Burke had some hard hitters and they did a great job of attacking the ball in sets 3 and 4 which kept us out of the system.

“It went back and forth in set 5 and it came down to who made the less mistakes. We played with a lot of intensity and never gave up after losing in sets 4 and 5,” said Keiser.

Hammerbeck was 100 percent in serving and Richey was 94 percent. Brozik had 6 ace serves and Kalla Bertram, 4.  Hammerbeck had 21 kills, Marts, 8 and Brozik, 7. Levi had 36 set assists. Richey had 22 digs and Hammerbeck, 17. Hammerbeck had 2 assist blocks, Marts and Bertram, 1 each.

Coach Keiser said: “We came out ready to play and played very well in the first and second set. We did a great job of serving and attacking the ball. In the third set we struggled with serve receive and attacking the ball and dug ourselves a hole. We fought back and had the momentum going into game 4 even though we lost set 3.

“I was proud that we played together as a team and never gave up after losing set 3,” said Keiser.

The next action for Winner will be Sept. 11 at Lyman.