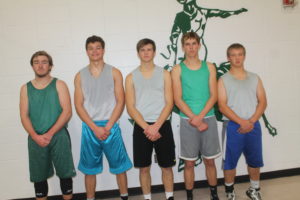 Five lettermen will lead the Colome boys basketball team as they get ready to open the season.  The lettermen are: Jackson Kinzer, Beau Bertram, Kolton Salonen, Layton Thieman and Wyatt Cahoy.

Colome opens the season at home on Dec. 14 against Gregory.

The Cowboys finished last season with a 16-5 record.

Among the major losses from a year ago are Holden Thieman, Kelly O’Bryan, Will Cahoy, Isaac Kortan, and Garrett Salonen.

Coach Drew Weber says the Cowboys should have a balanced team with the biggest keys being defense and rebounding.
The coach says the team has a lot of good athletes.

Kolton Salonen and Kinzer are returning starters and Beau Bertram, Cahoy and Thieman were the first three off the bench.
Weber says it really helps having Dufek, Varilek and Ringing Shield out his season.

“I expect those three along with Laprath to give us more depth this year,” said Weber.  In practice, the Cowboys have been working on fundamentals.  “This group is willing to work hard but they know they have a long ways to go,” said the coach.

The Cowboys will play in two conferences—South Central and a new one to basketball—Great Plains.

There will be some changes in Class B basketball this season. Class B will implement the shot clock and the Sweet 16 format.
Weber says he is in favor of both. “The Sweet 16 some years will benefit us and some years will hurt us but as a whole it is good.”

Weber says the shot clock will not change Colome’s style of play. He says fans will see a quicker game.

As far as the top teams in boys basketball in Class B, Weber says Bridgewater-Emery-Ethan will be tough along with Sully Buttes and in Colome’s region Corsica-Stickney, Gregory and the Cowboys will be tough.

The assistant coach for the Cowboys will be Derek Graesser.