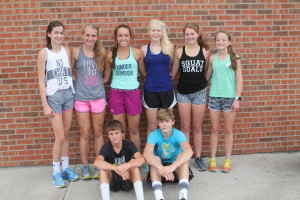 Winner Area cross country team will open the season at the Winner Invitational on Aug. 25 at the Winner Country Club at 10 a.m.
In addition to Winner, several area teams will be running.

Atlas Willuweit is the only senior on the team.

Last year the girls placed 6th at state.  Sidda Schuyler took seventh place.  At the end of the season, Schuyler was named to the all-state cross county team.

Coach Jayd Schuyler says the team will be young.

“We lost a couple of good girls. Replacing them we have some experience coming back,” said Schuyler.

The coach said practice has been going well. Practice started Aug.10 and the team has been doing two a day practices.

Schuyler says the Warriors will have tougher schedule this year. They have added the Rapid City Invitational which is a very tough meet. The team will see a lot of schools from the Hills area plus Wyoming and North Dakota. The Rapid City meet is Sept. 22.

The coach is looking for a good year.  Schuyler’s assistant coach is Jon Hanson.