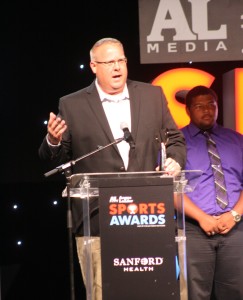 In his years of coaching football, Dan Aaker of Winner has never had to worry about a shooter at game.

But that all changed Friday night when the Warriors played the Cubs in Chamberlain.

A suicidal man fired a shot at the practice football field right before the start of the football game.

Chamberlain police chief Joe Hutmacher said the incident began around 4 p.m. when authorities were notified of a man writing a suicidal post on Facebook. The man led police on a chase which ended at the practice football field.

“You could hear the sirens coming and I am in focus mode for the game. I do not think the sirens are coming to the field,” said Aaker in an interview Sunday afternoon.

The head coach explained he looked off to the side and saw a car coming onto the practice football field. “Our assistant coaches did a tremendous job of getting our players off the field and back behind the grand stand. At that point we did not know if the car was going to continue onto the playing field.”

An announcement was made that all fans had to clear the grandstand. Chamberlain had officials helping to get people to safe place behind the grandstand. There were a lot of people at the game as it was Chamberlain’s homecoming and a lot of Winner fans were in attendance to follow the Warriors.

Aaker noted here was a law enforcement vehicle right behind he car and he was not going to let that car come onto the football field.

“I saw everything. I saw the person in the car fire a shot. He fired the shot while in the vehicle. Then, three to four more law enforcement vehicles arrive.”

An all clear was given over the public address system but they had to take it back as the police had not given the all clear yet.

When the man was taken away the players were allowed back on the field and the game started at around 7:30 p.m., about a half an hour late.

“I was glad the individual involved was not seriously hurt and no else was hurt,” said Aaker. “I hope he gets some help that he needs and gets some peace in his life. It could have been a lot worse,” said the coach.

Aaker believes the individual was not out to hurt people. But he noted it sure makes you think if there was a true active shooter.

Aaker said this week the Winner administration will take a look at how well the Winner School District is prepared.

“We have emergency action plans at all our facilities but how detailed are they for a shooter,” he said.

Aaker said he did not notice any difference in the team as they went on to play a wild game that ended with the Warriors on top 42-40.