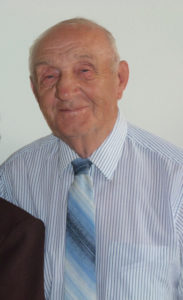 Funeral services for Calvin Hofer were held May 26 at the Trinity Community Church on Bridgewater. Burial was in the Bridgewater city cemetery.

Calvin Dean Hofer (90) was born on Dec. 14, 1927, in a stone house on the family farm near Wolf Creek southwest of Bridgewater, SD. His parents were Joseph R. and Anna Rose (Tschetter) Hofer. He attended Bridgewater Schools.
He married Evelyn (Hossle) Hofer of Hamill, SD, on Sept. 16, 1951. They had two children.

Calvin was active in sports, community, and church. He organized and played in a church basketball league in his young adult years, officiated high school basketball, and played baseball or softball until he was 67. He served the community as McCook County Republican Chairman, as member of the township board, and as a school board member for many years. In his church (Trinity Orthodox Presbyterian/Trinity Community Church), he served as an elder for over 55 years.

Calvin drove red tractors and raised red cattle and crops as a farmer/rancher on the family farm which was declared a Century Farm in 2007. He was actively farming until his 89th birthday. He resided in the Bridgewater Diamond Care Center since January 2017 and went to heaven on May 18, 2018.

Calvin was preceded in death by his parents, his brother Alvin, and his sister Ruth Thaden.

He is survived and will be missed by his wife of over 66 years, Evelyn; his son, Robin Hofer of Bridgewater; his daughter Trudi (Dave) Nelson of Sioux Falls; three grandchildren — Dusti (Aaron) Jones of San Antonio, TX; Kyle (Kathryn) Nelson of Lincoln, NE; Kensi (Patrick) Proehl of Owatonna, MN; six great-grand- children who Calvin thought were the smartest kids ever; and brother-in-law Everett (Carol Jo) Hossle of Hamill, SD.