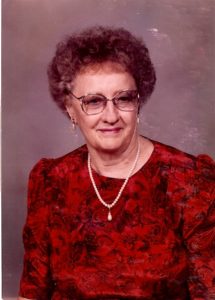 Arlene Fern Meiners was born April 11, 1921 to Henry and Emilia (Marohn) Meiners at Lamar, NE. She was baptized in the Lutheran Church at Amherst, CO in 1921. The family moved to the Millboro/Clearfield area in SD and lived in a sod house for a while. Arlene was confirmed in the Jerusalem Lutheran Church near Carter, SD. She went to high school in the Millboro Church basement and graduated with salutatorian honors.

Arlene married Joseph Kostal in Rapid City in the Little Brown Church in 1939. To this union three children were born: LaVonne, Dianne, and Dwain. They lived on a farm west of Colome. Arlene worked at Pamida for over 25 years.