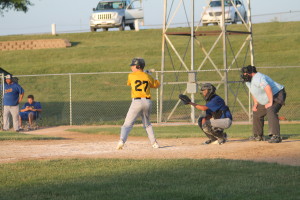 “We hit the ball well as six different players had hits,” said coach Jon Hanson. Pravecek had hits and Devon Senter and Michael Olson each reached base safely three times each. 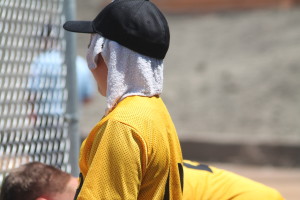 The tournament was won by Gregory with victory over Tyndall.

Winner Junior Teeners opened the tournament Saturday morning with a 6-2 victory over Pierre 13-14 year olds.  Brady Fritz started on the mound for Winner. 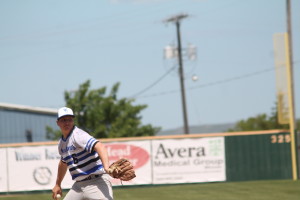 Drew Weber fired a no hitter last Tuesday to lift the Winner/Colome amateur baseball team to a 9-0 victory over Pierre at Leahy Bowl. The game was decided in seven innings.

Weber had seven strikeouts in the victory and had no walks.

Alexandria has taken over the top spot in Class B.

The Renner Monarchs continue to hold onto the top spot in Class A. 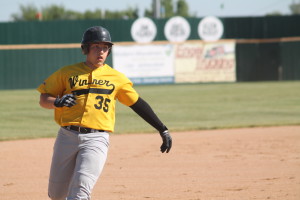 Levi McClanahan pitched a no hitter as the Winner Teeners defeated Mission 15-0 in three innings Thursday in Winner.  McClanahan had 8 strikeouts.

On June 15 in Chamberlain, the Winner Teeners came up with a 5-4 victory in 8 innings.

Winner was down 4-1 going into the 7th inning and they came up with the runs to tie the game and send it into extra innings. In the 8th, Riley Calhoon scored the winning run.

Cale Meiners was the winning pitcher as he pitched seven innings and Calhoon came in the extra inning.
Leading hitters were Calhoon, Meiners and Joren Bruun, all with 2 singles each.

Bonnie was born to Lawrence (Bud) and Lois (Creveling) Brown and spent part of her childhood in Ellston, IA. They moved to Wood in 1949, where Bonnie graduated high school in 1957 and enjoyed attending the all school reunions throughout the years.

She married Kencel Robinson on October 24, 1959 and to this union three children were born: Sheba, Shane and Shawn. Her family remembers her as hard working, a good cook, always at our events, loved the outdoors and entertain many of our friends and family.

In 1984, Bonnie moved to Winner and watched over her parents and worked as a bookkeeper for several years. She was always on the go, shopping – anywhere, anything, rummages the more the better, dressing up, playing ten point pitch and drinking coffee with her many friends. She believed in hard work and enjoyed “ANY” challenge. Many will remember her as a strong woman, with a quick wit, sparkling eyes and kind smile.

Bonnie had many hobbies and collecting was one. She enjoyed showing off her treasures, no matter how big or small, she enjoyed the simple things in life. She enjoyed a good laugh and was known for jokes and funny cards.
Her favorite pastime was spending time with her five grandchildren; they hold many fond memories of a grandmother who loved them dearly. She watched over them, went to their events, enjoyed roughhousing and teasing and left us a few famous “Grandma Bonnie quotes”. She loved all children and could be found on the floor or outside playing with them. 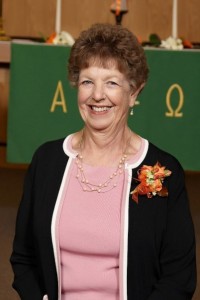 Dorothy Christina Steffen, 81, passed away at Sanford Hospice Cottage, Sioux Falls, SD, on June 14, 2016 after a brief battle with lung cancer.
Dorothy Vander Kuur was born February 8, 1935 in Paxton, SD to Leonard and Christena Vander Kuur.
She grew up with sister, Lorraine, and brother, Norman, enjoying airplane rides from her father and great German cooking from her mother.
She attended St. Mary’s School of Nursing in Pierre and obtained her Licensed Practical Nurse (LPN) license prior to meeting and subsequently marrying the love of her life, Henry “Vic” Steffen, on February 14, 1960. They lived in Burke, SD and Ft. Riley, Kansas before they bought their first home in Blunt, SD in 1972, where Dorothy lived until moving to Sioux Falls in 2014.
Vic, who was Assistant Director of EMS Services in South Dakota, was tragically killed in an accident in 1976.
After Vic’s death, Dorothy received her EMT certification in 1977. She became one of the first female members of the Blunt Volunteer Fire Department when she joined that year ,as an EMT, to be part of their medical response team. She became a CPR Instructor in 1979 and a CPR Instructor Trainer in 1983. She was available for emergency calls, day or night, as part of this medical team. She provided various other nursing cares to the people of Blunt when needed, as well. The Blunt Elementary Fire Prevention Program was another way Dorothy was active in her community through the Fire Department, taking over as Chairperson of that program from 2003-2014.
Dorothy was employed at St Mary’s Hospital in Pierre, working on the Surgical/Orthopedic unit, but her main love was for care of Pediatric patients. She became well known for her role in the “Come and See” Program, allowing her to take school-aged children on tours of the hospital, showing them her world and enjoying all of their funny comments. She retired from St. Mary’s in 2000 after 25 years of caring. 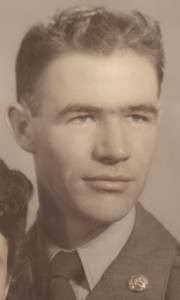 Robert B. Rowan was born September 8th, 1927 to Andrew F. Rowan and Fannie (Bauld) in his Aunt Ella Johnson’s house in Springview, NE. He passed away on June 13, 2016 at the age of 88 years old. He was the last surviving sibling of this family union.

He attended Payne School District and graduated from Keya Paha School in 1945. After graduation, he remained on the family homestead until he was drafted into the US Army on November 28th, 1950 during the Korean War. He was stationed at Fort Riley, KS. During this time, he was united in marriage to Helen Marie (Birkel) on January 25, 1951 at Junction City, KS. He was honorably discharged on November 27th, 1952. They returned home to the family homestead and began farming and ranching with his family. They were blessed with 2 children – Steven Loy and Sandra Kay.

Bob was baptized in his Christian faith with his children, Steve and Sandra in the Methodist Church in Jamison, NE. Bob was a life long member of the Methodist faith.

During Bob’s lifetime, he believed in serving his community. He was a Three River Telco board member for over 55 years, a school board member for the District 3 at Mills, NE; a member of the American Post Legion #98; and also a board member of the ASCS program. He enjoyed farming and ranching, playing cards, cooking, singing, and Carlock dances. He liked telling stories and loved the outdoors. Most of all, he had a great love for his family and friends, and enjoyed watching his grandchildren and great-grandchildren grow up. He took pleasure in the simple things and touched the lives of everyone he met. 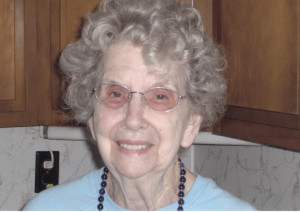 Viola May (Tomason) Gilbert was born at Bonesteel, SD on October 7th, 1922 to George and Anna (Nelson) Tomason. She was delivered by her grandmother who was a local midwife.

Her childhood was spent in Bonesteel area during the Depression years. The eldest of three children, she helped with chores and housework. Viola and younger sister Dorothy were joined by brother Jim when she was eleven. She doted on her little brother.

Viola attended school in Bonesteel graduating in 1940. She received a teaching certificate from Southern State teachers college in Springfield, SD. She taught country school for 4 years. It was then she became acquainted with a young sailor home on leave, Lloyd Gilbert.

Lloyd and Viola married in 1947 and made their home north of Burke in the house Lloyd built for them. Together they raised Glenn and Linda on the farm. Viola was a devoted wife and mother. She gardened, raised chickens, canned, sewed, and was a 4-H leader for 10 years.

In 1968, Lloyd began working on road construction. Viola traveled with him. She enjoyed making new friends and seeing various parts of South Dakota.

Upon retirement Lloyd and Viola remained on the farm enjoying the simple things in life; family, friends and home. They frequented auctions often finding some special treasures.

In 2000, Viola moved to Burke after Lloyd’s passing. She began volunteering at the Hospital Auxiliary Thrift Store. She loved her yard and flowers, planting something new each year. Her grandchildren visited often. These special times brought happiness to all.

In 2014 she moved to Silver Threads in Gregory. Again she made new friends, and always enjoyed each day that was given. 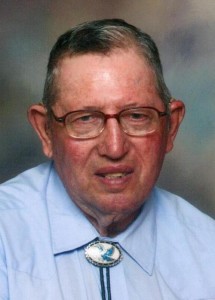 Blalin was born on January 20, 1934 and was the oldest child of Lester and Elvia (Bader) Bellander. He was born and raised in Tripp County, SD. He went to Colome High School and graduated in 1953. He served in the National Guard and was then drafted into the Army, serving from 1956 through 1958. Returning from the Army, he worked on the Oahe Dam in Pierre where he met Marie Tagtow. They married in 1960. Blalin worked on many construction projects that took he and his family to many locations throughout the midwest and eastern states. He was a life-long member of the DAV. The love of the truth of God was very important to Blalin and he made his choice to serve the Lord. The love of knowing and serving God was his priority for his remaining years.