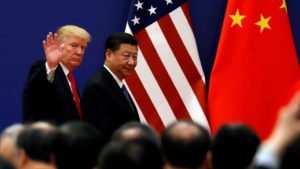 China placed a 25 percent retaliatory tariff on multiple U.S. goods, including sorghum. The retaliatory tariff also applies to U.S. soybeans, cotton, wheat, vegetables, beef, pork and others and will go into effect on July 6. This action was in response to the U.S. issuing a 25 percent tariff earlier today on 1,102 Chinese goods.

“National Sorghum Producers, alongside our producers, stakeholders and partners, have already seen the market uncertainty and price fluctuations that occur when China retaliates on U.S. goods. We urge President Trump and the Administration to move forward with constructive trade negotiations that will end tariffs on U.S. agriculture, especially during times of existing economic stress.

“We understand the grave impact tariff decisions can inflict on producers. American farmers depend on trade with China, and these tariffs will have devastating effects on U.S. agriculture. We greatly value our business relationship with Chinese buyers and hope to see this win-win relationship move forward. We have witnessed the Administration’s efforts in positive trade negations in the past that lifted sanctions on U.S. sorghum and hope to see similar efforts going forward.

“National Sorghum Producers will continue to work with and encourage officials to achieve long-term trade solutions with China. Protecting our markets remains the No. 1 priority for U.S. sorghum farmers and the agriculture industry.” 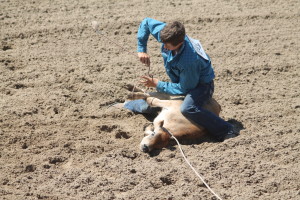 Sunday’s results from the regional rodeo include: 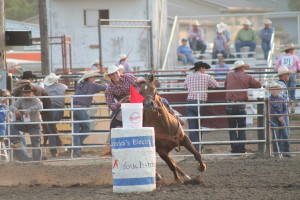 The last two weekends, area High School Rodeo athletes have been working hard to gain enough points to make it to the State Rodeo Finals in Belle Fourche this week, June 13-16. Competition will begin on Thursday with the first performance, Friday will be the second performance and Saturday will be the Short Go.

To get qualified for state, you must carry in at least 3 points to make an appearance in Belle Fourche. There are four performances in the regional rodeos and points are given by placings. First receives 10 points, second receives 9 points and so on. The first weekend the rodeo was held in Highmore, winds were making it difficult for all events. The second weekend was held in Ft. Pierre, the weather cooperated, giving better chances to qualify. Athletes then carry the best of 3 performances to state, so for example if you earned 6, 9, 4 and 8 in any event, you disregard the lowest point and for this event, you would get to carry 23 points to state. The most you can take in is 30 points. Once at state, points build on top of these and then the top 4 point earners will make an appearance in Rock Springs, WY for the National Finals in July.

Of our 12 Tripp County High School Rodeo Athletes, 7 qualified for state. The River Region is a very strong competitive region of rodeo. There are 4 regions in South Dakota, the River, the Eastern, the Southwest and the Northwest.

Area students have been named to the spring semester dean’s list at Northern State University.

Brandon Bicek of Winner was named to the dean’s list. 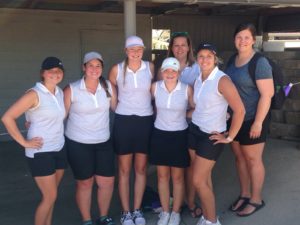 Winner’s Ronae Klein and Wagner’s Caitlyn Simpson tied for 11th place with a 176.

Cheyenne Dougherty tied for 65th with a 219. 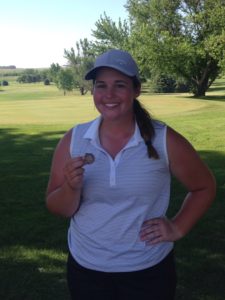 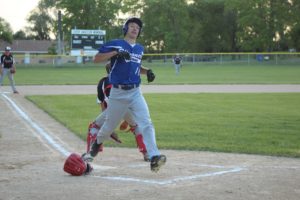 Winner/Colome Legion baseball team was nipped by Gregory 8-7 in nine innings on June 6.

“We had one bad inning in the field where our pitchers struggled to throw strikes and that killed us,” said coach Drew Weber. “We also struck out too much at the plate to win games like these.”

At the plate, Riley Calhoon had 3 singles and a triple and Jackson Kinzer had a 2 RBI triple.

“We are still moving guys around and have some missing for other activities but we need to play more sound baseball in order to start getting some wins,” said Weber.

Winner/Colome Legion baseball team played in a tough tournament this weekend in Aberdeen.

In the first game, Huron defeated the Royals 16-6.

Calvin Ringing Shield had 2 hits, Dalton Baker, a double and two RBIs; Chase Dufek and Baker combined to give up 5 earned runs on 7 hits.

In the third game, the Royals defeated Warner, 9-6.

Chase Dufek had a double and a single, Jackson Kinzer, triple and 2 RBIs, Riley Calhoon and Levi McClanahan, a single, 2 runs scored each.

Milbank nippedWinner/Colome 7-6 in the fourth game for the Royals.

Dufek had 2 singles, 2 RBIs, Calhoon and Baker, both a double; Kinzer, single and 2 RBIs.

“This was a difficult tournament for us defensively,” said coach Drew Weber. “Our pitchers were a little wild at times and we just didn’t make enough plays in the field to give ourselves a chance to win a close game,” said Weber.

The coach added: “Offensively, we did a really good job of putting the ball in play and had solid production from the entire lineup. We need to get back to our style of play that limits mistakes and throws strikes but we have some time to get things in order,” explained the coach. 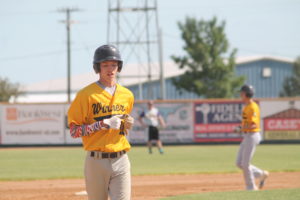 The Winner Jr. Legion team defeated Gregory June 4 at Leahy Bowl by a score of 9-7.

After trailing 6-0 early, Winner battled back with a 4-run bottom of the 3rd, and took the lead for good with a 5-run 5th inning.
The offense had a big night, belting out 13 hits, including a 3 for 4 night from Kameron Meiners. Joren Bruun was 2 for 4 with 3 RBI’s, while Phillip Jorgensen added 2 hits (both triples), and 3 RBI’s.

Joren Bruun got the start on the mound and went 4 innings, giving up 6 hits and 7 runs (4 earned), while striking out 3. Jacob Beckers pitched 3 strong innings in relief, giving up just one hit, no runs, and striking out 5.

“The defense struggled early, committing 4 errors, leading to 3 unearned runs. After that, the boys played well in the field, and the offense really picked us up,” said coach Kory Foss.

“ We put a lot of good swings on the ball and found some gaps. It’s always nice when the offense clicks because it seems to pick everyone up and that then carries over to the defensive side,” said Foss.
With the victory, Winner Jr. Legion moves to 3-0 on the year.

On a day when the winds were swirling, every ball hit in the air was a challenge for fielders and as a result each team committed five errors.

After falling behind 9-6 early, Winner stormed back to outscore Platte 12-1 over the next four innings.
Kameron Meiners got the win on the mound after coming in relief for starter Phillip Jorgensen. Aaron Gilchrist closed the door pitching the final three innings while only giving up one run on three hits.

Winner racked up 13 hits for the day led by Colby Kaiser who was 4-4.

Oscar Pravecek had a big game at the plate as well going 2 for 2 with a two run home run to left while walking three times and scoring five runs.

Fred Whiting was 2-3 with 4 RBI’s including a big double in a four run fourth inning.

Jorgensen went 3-5 with an RBI.

Winner Junior Legion beat Bennett Counties Legion team by a score of 14-4 in 6 innings on June 6. The game was called due to the 10-run rule.

Kameron Meiners was 3 for 5 at the plate with 3 RBI’s. Philip Jorgensen was 2 for 4 with 2 RBI’s. Oscar Pravecek was 2 for 3. Landon Theiman added a hit and an RBI.

Kameron Meiners started and pitched 4 innings, giving up 5 hits and 3 earned runs while striking out 5. Fred Whiting pitched a scoreless inning, striking out one.

Overall, it was a good game for our offense with 13 hits said coach Kory Foss. “We’re getting contributions from all parts of our order, as 9 different players had at least 1 hit. Kameron did a nice job on the mound, and didn’t give up a hit until the 4th inning. Fred threw well in his inning of relief, which was nice to see as it was his first time on the mound this summer. The defense played well, and didn’t commit an error, which was encouraging because we’ve struggled with that at times early this season,” said Foss.

With the win Winner moves to 4-0 on the year. 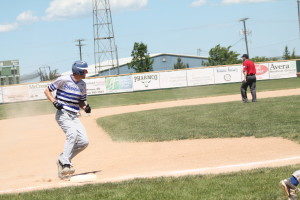 The Pheasants snapped the win streak which dates back to May 26, 2017 when Winner/Colome also defeated Alexandria, 5-4.

Connor Hopkins, who pitched for Winner/Colome,

fanned 15 batters in a no hitter.

In the fifth inning, Zach Harter scored the go-ahead run on a Trever Vermeulen wild pitch.

Offensively, Harter had a double, Austin Richey recorded two hits and Austin Calhoon had a double.

Austin Richey hit a two run home run in the fourth inning. The Pheasants scored another run in the fifth, four in the sixth and three in the seventh.

Reed Harter and Austin Calhoon were 3-5 with two RBIs which Zach Harter had two hits.

Derek Graesser got the win on the mound. He struck out nine batters and allowed four hits and two walks. 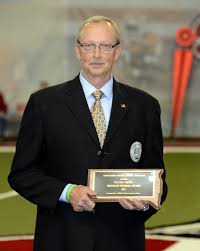 By Dana Hess
For the S.D. Newspaper Association

The former executive director of the South Dakota High School Activities Association will join the board of directors of the SDHSAA Foundation.

Carney was instrumental in the formation of the foundation during his tenure as executive director.

“Quite frankly, the foundation has had a hard time getting started,” Stevens said, adding that the organization would benefit from Carney’s experience.

The appointment of the board members from the association will likely take place at the group’s August meeting.

At its Thursday meeting, the SDHSAA board welcomed a new banking sponsor, Dakotah Bank, which signed a five year agreement to make yearly donations of $75,000 to the association. Corporate sponsors receive a variety of marketing benefits for their donations. 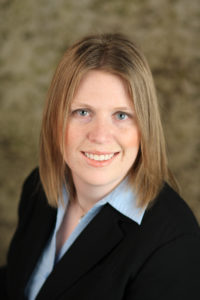 Brooke Swier Schloss of Swier Law Firm was recently honored as one of the “Top 25 Women in Business” by Prairie Business magazine.

“I am so honored that Prairie Business magazine recognizes the accomplishments of professional women in our region,” said Brooke Swier Schloss. “As the mother of two small daughters, I am thrilled to tell them ‘Look at the opportunities you have to chase your dreams.’ I am humbled to be part of such a successful group of businesswomen.”

“We are very proud of Brooke’s achievement in being named one of the ‘Top 25 Women in Business for 2018,” said Scott Swier. “She is the epitome of a dedicated professional and selfless volunteer.”

A reception was held on Thursday, May 17, in the Dakota Ballroom at the Avalon Events Center in Fargo, to celebrate the 2018 Top 25 Women in Business.