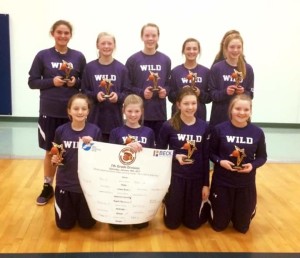 The Winner Wild started their tournament season with a first place finish at the Pierre tournament on Jan. 14.

In the first game, Winner defeated Sturgis 24-17. Kelsey Sachtjen scored 10 points followed by Ellie Brozik with 7, Kelbi Meiners, 3 and Emma Jorgensen and Hattie Hespe with 2 each

The coach said all the girls contributed to the first place finish. “They showed a lot of determination and kept fighting to pull off the victory.”