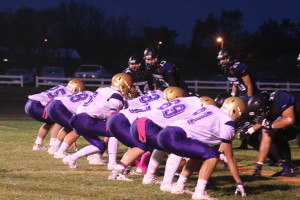 The Blackhawks broke a 14-14 halftime score with a touchdown with 41 seconds left in the fourth quarter.

The Warriors were not done yet and put together a good drive as Cartrer Brickman put up a pass to Riley Calhoon. In a couple of plays the Warriors got closer to the goal line. Winner got the ball to the seven yard line and called time out with 2 seconds left.
The Blackhawks stuffed Phillip Jorgensen short of the goal line.

Coach Dan Aaker said it was fun game. He noted it was a tale of two halves. Neither team stopped each other in the first half.
The Warriors were able to get the Blackhawks to cough up the ball three times in the first half. However, Winner never got any points.

Winner opened the scoring in the first quarter on a 10 yard run by Jorgensen.

The Blackhawks tied the score 8-8 on a 70 yard run by John Witte.

Winner came back and put together another drive capped by Brickman’s 1 yard TD run. The score is now 14-8.

In the second quarter, Woonsocket scores again tying the score at 14-14.

The half ended with the two teams tied.

The two teams were scoreless in the third quarter.

The Warriors had 281 yards rushing and 15 first downs.

The leading rusher was Calhoon 79 yards, followed by Jorgensen, 59 yards, Matt Smither, 44 yards and Ty Bolton, 22 yards.
In passing, Brickman was 5-7 for 65 yards.

Leading the defense was Levi McClanahan with 16 tackles, Brandon Volmer, Shea Connot and A. J. Roubideaux with 9 each and Matt Smither with 8.

“Our kids fought and battled hard. We did not execute as well as we need if we are going to be a threat going into the playoffs,” said Aaker.

“Overall, it was a fun game. We have been on the good end of a lot of these game and it does not feel good to be the other end,” said the coach.

This was he final game of the regular season as Winner finishes with a 6-2 record.