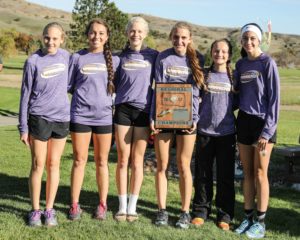 Sidda Schuyler won first place at the Region 4A meet in Chamberlain on Thursday and helped the Winner Area girls team to a first place title.

For the second year in a row the girls are the region champions and qualify the whole team for state. The boys placed fifth as a team and Kade Watson, Dawson Phillips and Wyatt Turnquist qualify for the state meet.

This is Schuyler’s first time winning the region cross country title. Her winning time was 18:14.22 and is the second fastest time for a girl in the state this year in Class AA, A or B.

“Sidda was 7th last year at state as a 7th grader and she looks to improve on that place this year,” said coach Jayd Schuyler.

Schuyler said Watson ran his best race of the year and looks to finish with a top 10 place at the state meet.

The Winner girls finished in sixth place at the 2016 state cross country meet. “The girls are looking to improve on that place this year,” said Schuyler.

One cross country poll has the Winner girls rated fifth and another has them rated 6th.

The state cross country meet is Saturday, Oct. 21 at the Hart Ranch in Rapid City.