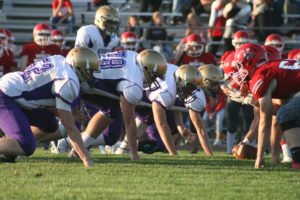 “We tried to prepare our guys all week to understand the intensity we knew Valentine was going to bring to this game,” said coach Dan Aaker.

“We have beaten them 11 straight years and they really wanted us bad.”

The score was tied 14-14 at halftime and Winner played an excellent third quarter to pull away for the win.

The Badgers got on the board first at the end of the first quarter. Jon Keller completed a 59 yard pass to Devon Osnes.

The Warriors countered with a long drive and Trevor Peters scored on a five yard run.

Midway in the second quarter, Valentine scored again giving them a 14-6 lead.

In the third quarter, Winner scored two touchdowns. Sam Kruger scored on a 3 yard run and Phillip Jorgensen scored o a 30 yard run to give Winner a 26-14 lead.

However, Valentine came back in the fourth quarter and scored to narrow the score.

With 6 minutes left, Winner had a nice drive but fumbled inside the 30-yard line.

The Warriors had 380 total yards and Valentine had 284 yards. Winner had 355 yards rushing.

Leading rusher was Peters with 139 yards followed by Jorgensen with 109, Kruger with 80.

“It is a quality win,” said Aaker. “I saw some resilience in our guys. We did not play very clean as we had 3 turnover and penalties killed us,” said the coach.

For homecoming on Friday, Sept. 21, the Warriors will host the undefeated Mt. Vernon-Plankinton who is rated No. 3 in Class 11B.

Aaker says a big concern will be their junior running back Jessie Hastings. He added MVP has a nice team and will be a good challenge.

The WHS coach noted: “I like playing good teams for homecoming because it forces our guys to understand that they need to bring their best game to the table.”

It is an exciting week with all the homecoming events including the coronation on Thursday night.

“We are looking for an exciting week,” said Aaker.